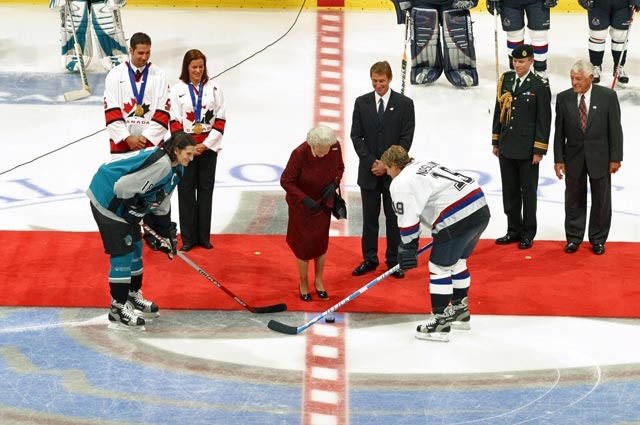 2002: Introduced by royal trumpets and walking along a red carpet, Queen Elizabeth II dropped the ceremonial first puck before an exhibition game between the Vancouver Canucks and San Jose Sharks. The British monarch, who last attended a hockey game 51 years ago, dropped the puck between Canucks captain Markus Naslund and Mike Ricci of the Sharks. She then sat in the royal suite, where she watched the first period of the game. The 76-year-old monarch, flanked by local minor hockey league players, was led to the center of the rink -- where she was joined by Wayne Gretzky, the NHL all-time leading scorer, and executive director of the gold medal-winning 2002 Canadian Olympic Hockey Team. Also at center ice were Cassie Campbell, captain of the Canadian women's Olympic team; Canucks and Team Canada defenceman Ed Jovanovski; and Hall of Fame television broadcaster Howie Meeker. The Queen was in Vancouver with her husband, Prince Philip, Duke of Edinburgh, as part of a 12-day tour of Canada, celebrating the 50th anniversary of her rule.