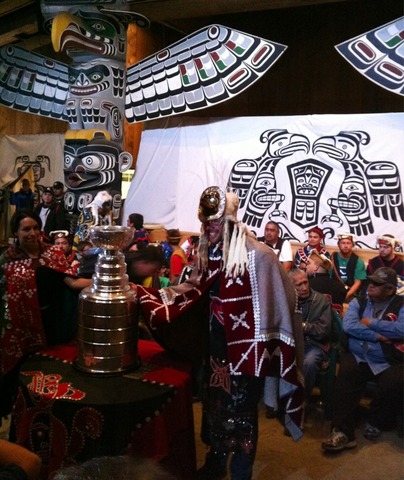 First Nations Alert Bay - Community Commemorate Willie Mitchell's Stanley Cup victory - The ceremony in Alert Bay started with drumming, dancing and people in brightly colored traditional outfits assembled along either side of a path laid out for Mitchell and the Cup's arrival, with cedar branches along the edge of a walkway blessed by the elders. Cheers followed Mitchell into the Big House, soon replaced by the trailing drums that reverberated deep inside the wall-to-wall crowd by the time Mitchell and his wife, Megan, were seated on a large hand-carved and painted bench.

The Stanley Cup sat beside them atop a table covered by a ceremonial button blanket, with rows of elders and drummers behind, and a fire burning in front, smoke lifting out openings atop the big wooden building as light from those holes and the fire shone on the Cup.

"He has brought this Stanley Cup to our House, bringing all of those great players whose names are on that Cup into our House also with their spirits," Chief Bill Cranmer said in his remarks, reflecting on the significance of Mitchell's visit.

The Chief bestowed on Mitchell a new name – Xanyadzam, which translates to "truly amazing person" – and a vest with a colorful Killer Whale stitched into it.

"We've all heard Alert Bay being called the home of the killer whale and it's also one of the crests of the Kwakwaka'wakw First Nations [of which the 'Namgis are a part]," Cranmer said. "So this vest has nothing to do with the Canucks logo."