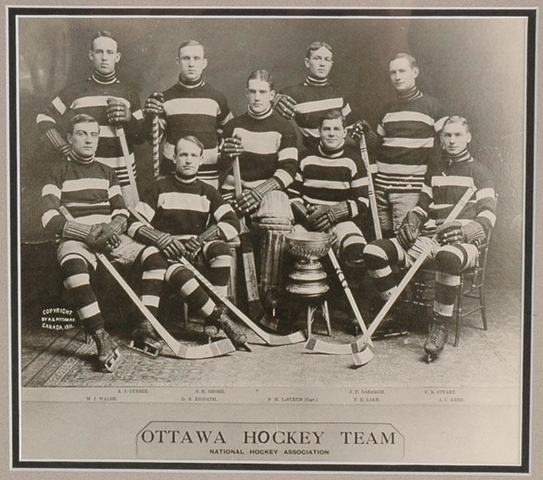 The Ottawa Hockey Club won the 1910-11 NHA league championship. Ottawa took over the Stanley Cup from the Montreal Wanderers and defended it against the Galt Professional Hockey Club on March 13, 1911, with a score of 7 to 4 for the Senators, Marty Walsh scores a Hat Trick in the win. The Port Arthur Seniors also played a 1 game challenge on March March 16, 1911, with a score of 13 to 4 for the Stanley Cup Champion, Ottawa Senators. Marty Walsh scores 10 goals in the game. After the season, The Ottawa Senators and the Montreal Wanderers played a 2 game exhibition series in Boston on March 22, 1911 and March 25, 1911. These 2 games would be the 1st Profession Ice Hockey games being played in Boston history.

Sourced from classicAuctions.net. Credited to A G Pittaway - Ottawa.