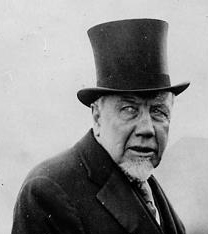 A fervent advocate of amateur sport, he served as president of the Ontario Hockey Association from 1899 to 1905, which was a critical time period in the history of the sport.

His battle to protect Hockey from the influence of professionalism caused him to be called the “father of Amateur Hockey in Ontario.”
During his term as president, the OHA was able to set rules defining professionalism in Hockey.

He worked especially hard to rid Hockey of increasing violence both on and off the ice.

Sourced from City of Toronto Archives.