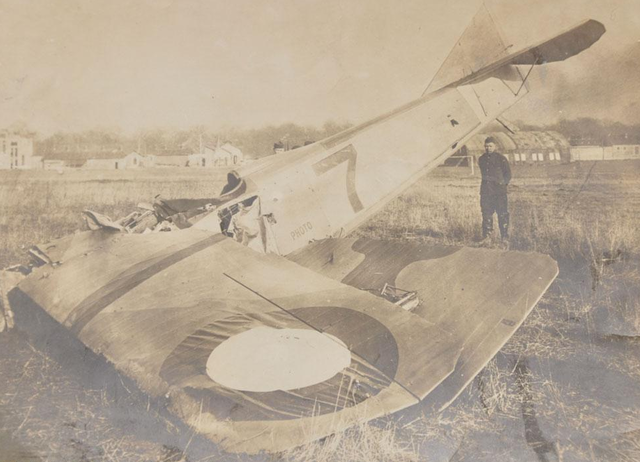 On December 21, 1918 - Hobey Baker received orders to return to the United States of America. Reluctant to leave France and return to his life in America, he decided to take a final flight at his squadron's airfield in Toul, France. This went against tradition and superstition for pilots, as a final flight was usually fatal. As he went for his own plane, the mechanic brought out a recently repaired one instead, in need of a test flight. The other pilots remonstrated with Baker, but he maintained that as commanding officer he could not let anyone else test the aircraft.
In heavy rain, Baker took off and began to level off at 600 feet. A quarter of a mile into the flight, the engine failed. The model of plane Baker was flying was easy to crash-land if necessary, something he had done previously at the cost of a few broken ribs. But on this flight he attempted to land at the airbase, which was made difficult by his lack of altitude, necessary to glide the plane into the hanger. A few hundred yards from the airfield, his plane crashed nose first into the ground. He was quickly freed from the aircraft by his men, but died in an ambulance minutes later; his orders to return home were found in his jacket pocket. Baker was buried in a small military cemetery in France near Toul, but in 1921 his mother had his remains moved to her family plot in West Laurel Hill Cemetery, Bala Cynwyd, Pennsylvania, USA