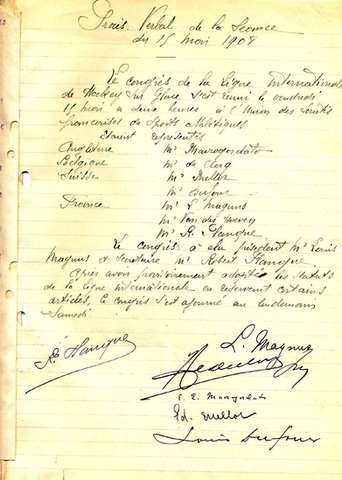 The first meeting of the Ligue Iinternational de Hockey sur Glace was organized by Louis Magnus on May 15-16, 1908, in his home at 34 rue de Provence, in Paris. Those attending included executives of the Club de Patineurs de Paris (Magnus, Robert Planque, and Robert van der Hoeven), as well as representatives from Belgium (Eddie De Clercq and Eduard Malaret), Switzerland (Eduard Mellor and Louis Dufour), and Great Britain (E.E. Mavrogodato).

Louis Magnus was named President and Planque General Secretary, and so began the formal organization of Hockey between countries.

Sourced from IIHF.com. Credited to IIHF.com.