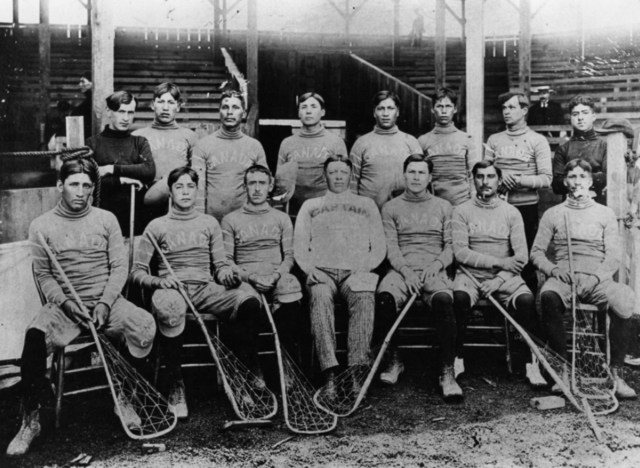 Mohawk Lacrosse Team / Six Nations of the Grand River Lacrosse Team.
Canada sweaters adorn this Mohawk / Six Nations team. They travelled to the St. Louis World's Fair: Louisiana Purchase Exposition in 1904
competing in games vs a Iroquois team and other lacrosse teams from America. They sometimes were also at Wild West Shows and other exhibition ground events / fairs with fields for sporting games.

The 1904 Olympic Summer Games were originally slated to take place in Chicago, but at the urging of U.S. president Theodore Roosevelt they were relocated to St. Louis, Missouri, to coincide with the Louisiana Purchase Exposition, also known as the St. Louis World’s Fair. The Olympic Games were thus a smaller part of a larger event.

The 1904 St. Louis World's Fair attracted nearly 20 million visitors during the 7 months the Exposition was open. About 60 countries and almost all of the states (there were only 45 at the time) participated. More than 60 countries maintained exhibition spaces at the fair.

The St. Louis World's Fair hosted “living exhibitions” available at the exposition’s human zoo, in which indigenous people from around the globe ..... as well as their food, dress, architecture, games, and religious rites were converted into fairground attractions. Exhibition organizers hoped to demonstrate to the world that ethnic groups could be definitively ranked according to biological and cultural markers of civilization, and that in this ranking, the United States came out on top. To accomplish this goal, they turned to a perhaps unusual tool: sports. Products and proponents of the masculine-coded, hyper-militaristic ideology of American imperialism, the Fair organizers believed that athletic competitions among the inhabitants of the “living exhibitions” could serve as a useful microcosm for testing the martial worth of a nation at the level of the individual (male) citizen. These competitions would also be a method for determining which peoples lacked the strength and virility to govern themselves.

The human zoo, which featured Filipinos (the US had recently acquired the Philippines as a colony) but also Native Americans, Congolese, Ainu, Patagonians, and other indigenous peoples, was of a piece with the Fair’s broader goal of demonstrating Western cultural superiority and touting conquest.

NOTE
It is reported they finished in 3rd position at the 1904 Olympics in St. Louis, Missouri, and there were maybe 3 teams participating at the lacrosse tournament ..... Winnipeg Shamrocks (winners) and St. Louis Amateur Athletic Association and the Mohawks ?. There is no evidence to support this lacrosse team ever competed at the 1904 Olympics, and that there was just 1 game (maybe 2) for the gold medal winners from Winnipeg.

Charley Lightfoot is also on this team. He is a black player and considered one of the early black Hockey players in history.
He should also be considered a early black lacrosse player.