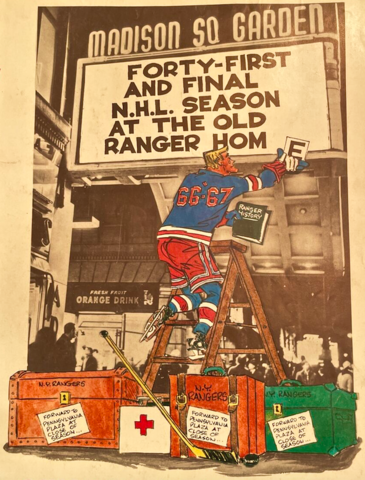 Built in 1925 and closed in 1968, it was located on the west side of Eighth Avenue between 49th and 50th streets in Manhattan. It had a famous marquee on 8th Avenue.

When MSG III opened, it was hailed as the world’s biggest and most impressive sports palace and - unlike the previous Gardens, would headline Hockey as a prime attraction.

The 1st NHL Ice Hockey game at Madison Square Garden was on December 15, 1925 before a capacity crowd of 17,000 at the grand opening of Madison Square Garden. Regimental bands and the Montreal Canadiens were on the ice for the first N.H.L. game in the city, and hundreds of New York’s society elite in tuxedos and gowns filled the most expensive seats. Mayor John F. Hylan dropped the ceremonial first puck, and the mayor-elect, Jimmy Walker, declared via megaphone that a new prize, the Prince of Wales Trophy, would go to the winner of the game. The N.H.L. still awards the trophy to the Eastern Conference champion. The game was a benefit for the Neurological Institute and would be followed by a ball at the Biltmore Hotel given by the Canadian Club of New York. The Times published two full columns of nothing but society names in attendance: Astors, Tiffanys, Paynes, Whitneys, Twomblys, Biddles, Tweeds and “Mrs. Franklin D. Roosevelt.” Frank Calder was there, too.

Shorty Green scored the first N.H.L. goal in New York at 11:50 of the 1st period, after he “coaxed the puck down along the field” and “climaxed his performance with a true shot,” as The New York Evening Post put it. But the Canadiens replied with goals from Battleship Leduc, Billy Boucher and Howie Morenz and won, 3-1.

The NY Americans, known as the Amerks played at MSG III from the opening on December 15, 1925 to 1942 due to World War II

The New York Rangers were founded in 1926, playing their first game in MSG III on November 16, 1926 vs the Montreal Maroons in a 1-0 Rangers win. Team captain Bill Cook scored the 1st Rangers goal at MSG III vs Clint Benedict of the Maroons at 18:37 of the 2nd period.

Frank Boucher became the first NHL player to reach 250 career assists during a game vs NY Americans on March 9, 1937.

The New York Rovers of the Eastern Hockey League used MSG III as their home from 1936 to 1952.

THE CURSE at MSG III
The Curse of 1940, also called Dutton's Curse, was a superstitious explanation for why the National Hockey League (NHL)'s New York Rangers did not win the league's championship trophy, the Stanley Cup, from 1940 through 1994.

During the 1939–40 season, the mortgage on the Rangers' home arena, the third Madison Square Garden (built in 1925), was paid off. Hence, the management of the Madison Square Garden Corporation symbolically burned the mortgage in the bowl of the Stanley Cup. This led some Hockey fans to believe that the Cup, which is regarded almost as a sacred object, had been "desecrated", leading the "HockeyGods" to place a curse on the Rangers.

Harry Howell was the first Ranger to have a night in his honor on January 25, 1967 “Harry Howell Night”

February 11, 1968, the Rangers played their final game at the Madison Square Garden / MSG III vs Detroit Red Wings in a 3-3 tie. Rangers legend Jean Ratelle scored the final NHL goal vs Roger Crozier at :45 of the 3rd period.

There was a ceremony before the game that featured 62 of the greatest players to ever skate on MSG III ice including Ching Johnson, Frank Boucher, and Bill and Bun Cook, all who played in the first Rangers home game in 1926. Opposition players included Maurice “Rocket” Richard and the Detroit Red Wings “Production Line” of Gordie Howe, Sid Abel and Ted Lindsay. . It was regarded as the greatest collection of Hockey talent ever assembled in one place. Each of the 62 Hockey Legends received a Revere Pewter Beer Mug engraved with "Guest of Honor" and "Madison Square Garden" along with the date Feb. 11, 1968.

1 Stanley Cup was awarded at MSG III in 1929 to the Boston Bruins
MSG III never had a game 7 playoff game.

Hockey Line Nicknames are quite interesting in NHL history, and the New York Rangers had 2 different forward lines with the same name while playing at MSG III
The 1st Bread Line - Bill Cook, Bun Cook and Frank Boucher 1926 to 1937 (all 3 in the HHOF).
The 2nd Bread Line - Alex Shibicky, Neil and Mac Colville 1938 to 1942 (Neil Colville in HHOF).

Gerry Cosby, a goalie who practiced with Rangers and played for the Rovers and Boston Olympics at MSG III, was also a innovator. He incorporated the fiber thumb and wrist into the Hockey glove, and redesigned Hockey jerseys to allow equipment to be worn comfortably underneath. He instituted the adjustable size and suspension style in the Hockey helmet. He also introduced the ankle protector, cellular rubber goalie equipment, and Velcro straps for Hockey pads. In addition to these innovations, he worked with a stick manufacturer to create laminated stick shafts and fiber glass wrapped blades. Many NHL players and the best players from other leagues shopped at his sporting goods store. Cosby also became a good friend of Lester Patrick.

Niven Busch, a famous novelist and screenwriter got his start at MSG III reporting on Hockey and it's players for The New Yorker Magazine. He spent 5 years doing this.