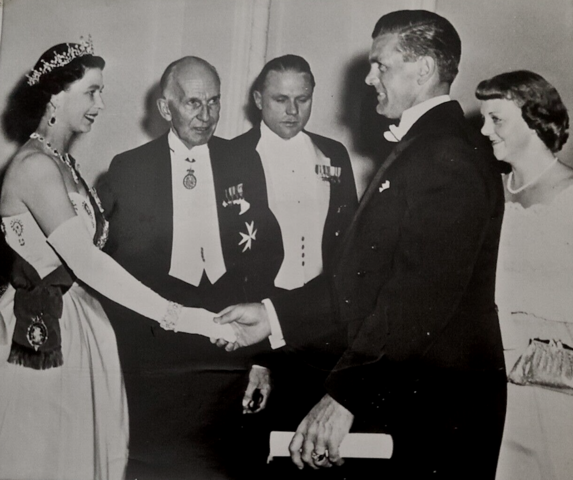 Queen Elizabeth II wanted to meet Rocket Richard, as she was gifted a Hockey puck that was used to establish the new NHL scoring record in 1952. The Rocket and Montreal general manager Frank Selke had sent this puck as a gift to the new Queen.

The puck was gold plated with a picture of Richard on the front, along with this inscription

Surrounded by 17 medals with images of Montreal players that were in the game.

On November 8, 1952 Maurice “Rocket” Richard scored the 325th goal of his career to become the NHL's all-time leading goal-scorer. The goal came at 10:01 of the second period with the assist to Bouchard, Richard fired a backhand shot from high in the slot that trickled past Black Hawks goalie Al Rollins and into the net. 6-4 Canadiens win.

NOTE
Princess Elizabeth, and Duke of Edinburgh were in attendance at the Montreal Forum on October 29, 1951 to see their 1st Full NHL game. Canadiens captain Émile Bouchard and New York Rangers captain Frankie Eddolls were introduced to the regal guests before the game. Rocket Richard scored 2 goals and Floyd Curry had his only NHL hat-trick as the Canadiens won 6-1.
Princess Elizabeth had already seen a NHL game, but took in just 15 minutes of the 1st period at Maple Leaf Gardens on October 13.

Sitting in a private box behind the Montreal bench, Princess Elizabeth received two standing ovations during the game from the fans at The Forum.

More than a half-million Montrealers had lined an unofficial parade route from the city's airport earlier in the day, as the Princess made her way to the Windsor Hotel in downtown, which in 1917 had been the site of meetings that gave birth to the NHL.