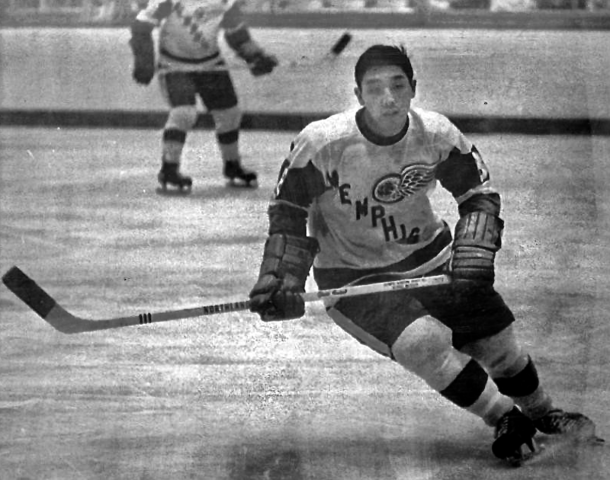 The Wakabayashi family was moved to a second internment camp in Northern Ontario (Neys Camp 100) shortly after Mel was born. The government kept the Wakabayashis and the other Japanese-Canadians in these camp until the war ended. After WWII, the Wakabayashi family moved to Chatham, Ontario where Mel grew up with his seven siblings. He excelled in both Hockey and baseball, playing junior Hockey with the Chatham Jr. Maroons.

Three of the Wakabayashi boys (Don, Mel and Herb) played for the Jr. Maroons, but Mel excelled as a crafty and speedy goal scorer, playing 3 seasons there, helping the Jr. Maroons win the championship of the Border Cities Junior B Hockey League (OHA) in 1959-60 and 1961-62 seasons.

During his final season in Chatham, he was scouted by Al Renfrew, coach of the University of Michigan Wolverines Hockey program. "He asked me if I had any interest in going to Michigan. I said, 'I can't afford to go, no way, and if it is difficult to get in, that could be another problem,'" Wakabayashi recounts. "My grades were only so-so, because I concentrated on sports in high school. Well, he brought me down to Ann Arbor to see the campus and take the SAT, and I did okay."

Due to freshman ineligibility, Wakabayashi could not join the team until January 1964. "The year off was really good for me because I was worried that I couldn't make the team," he says. "But seeing the players from Chatham (Al Hinnegan, Larry Babcock, Ron Coristine) do so well gave me a little confidence." The wide-open style of college Hockey in those days suited his breakaway speed; nevertheless, he says he was surprised to make the team.

"The college game was made for him," asserts former teammate Dean Lucier '67. "He's the best player I've ever stepped on the ice with, for or against, and that includes [NHL stars] Tony Esposito and Keith Magnuson. He had tremendous team sense."

Magnuson himself, who shone for the University of Denver and the Chicago Blackhawks, puts Wakabayashi on the short list of great college players. "We only played him two times, but Wakabayashi you didn't forget," he says. "He was very quick, and could find a way to beat you if you didn't have your senses about where he was on the ice. He was the guy you watched."

Renfrew's Wolverine teams never equaled the success they enjoyed during Wakabayashi's sophomore season, But that didn't stop the tiny centre from becoming the team's leading scorer with 17 goals (21 assists) and was 1964-65 WCHA scoring champion with 13 goals and 17 assists in league play. He won the Hal Downes Award as team's Most Valuable Player / MVP and was named a first-team All-American (junior).

As a senior, Wakabayashi was named the team captain, he was the Wolverines and WCHA's leading scorer with 19 goals and 33 assists, won team MVP Award, named WCHA Most Valuable Player / MVP and was named the league's Player of the Year.

Wakabayashi was known for his ability to avoid penalties. In three years of collegiate Hockey, Wakabayashi received only one penalty, a tripping call in his sophomore season. He later recalled, "Since I started playing Hockey in pee-wee, my coaches really banged it into my head that I was supposed to score the goals, not try to knock the big guys around and end up getting hurt or getting a penalty. I remember very clearly the feeling of sitting in that penalty box, and how much I realized I didn't like sitting in that box!

Mel Wakabayashi was inducted into Dekers Booster Club Hall of Fame at University of Michigan in 1967.

In January 1967, Wakabayashi signed with the NHL Detroit Red Wings and was assigned to play with the Red Wings' farm club, the Memphis Wings in Tennessee. Stats have him playing in just 2 games in Tennessee and he is also on a 1967 team photo. Wakabayashi played most of the 1966-67 season with the Eastern Hockey League / EHL Johnstown Jets, scoring 8 goals (18 assists) in 21 games.

Wakabayashi then received an intriguing offer from the Japan Ice Hockey League, then in its second year, to become the first foreigner recruited to play there. Ironically, Wakabayashi was once again the outsider, trying to prove that he belonged. "I spoke no Japanese," he says. "It was not as easy to adapt then as it is now for the foreign players. It was especially tough for me, because I had a Japanese face but not a Japanese mouth. And I didn't have an interpreter, either, so I had to learn fast."

Regardless, Wakabayashi was good for Japan. He played 12 years in the six-team Japan Ice Hockey League, playing 5 seasons with the Seibu Railways Ice Hockey Club (Seibu Railway Team) and then joining the Kokudo Bunnies as a player/coach for the 1972-73 season. He would later become head coach in 1977.

in 1984, Gordon (Red) Berenson '62, '66 MBA, had just been named Michigan's seventh coach and invited Wakabayashi to bring his Japanese national team to play in Ann Arbor. Although Wakabayashi's team lost 6-4, they played well and gained a measure of respect. After the game many of Wakabayashi's younger players discovered the big black-and-white photo in the Deker Hall of Fame lobby display of Wakabayashi in his prime, and had their pictures taken next to it. Remembering this, Wakabayashi's voice becomes soft. "That surprised me," he says.

He stayed on as the coach of the Japanese team for a number of years, and would even help out as a manager of U18s for a few years starting in 2008.

In 2001, Wakabayashi was one of three University of Michigan players (along with Red Berenson and John Matchefts) selected by the Western Collegiate Hockey Association / WCHA as one of the Top 50 Players in 50-year history of the conference.

Mel Wakabayashi was inducted into the Chatham Sports Hall of Fame in 2005.

Mel Wakabayashi was inducted into University of Michigan Athletic Hall of Honor in 2006.

This however, is not where the Wakabayashi legacy ends. Mel, Herb, eldest brother Don (was also a stellar athlete, playing baseball, and hockey for the Chatham Maroons), their five siblings, and many other relatives, have left a lasting impact in the sports world.

Dave Wakabayashi has carved out a role as the goaltending coach for the OUA champion University of Toronto Varsity Blues.

Chris Wakabayashi has served as an assistant coach for Japan’s men’s national team, and was head coach of the Tohoku Free Blades of the Asia League for many years.

Dwight Wakabayashi has been a successful sports writer for Bleacher Report, Sportsnet, CKSN and more, focusing on MMA, along with being a successful local Junior hockey player in Chatham-Kent.

These are only a few of the children and nephews of the Wakabayashi kids.