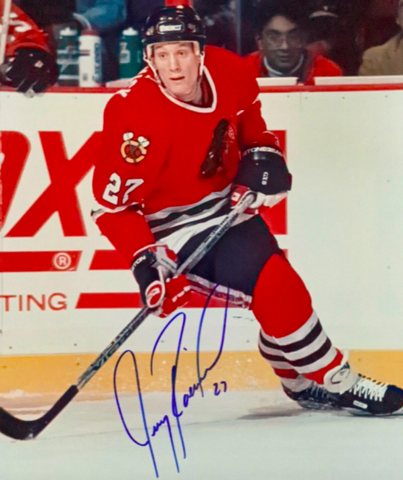 - 1st NHL Goal vs Kari Takko of the Minnesota North Stars at the Met Center on February 8, 1989.

Roenick became the 3rd American born player to score 500 NHL goals. He did that feat on November 10, 2007 vs Alex Auld of the Phoenix Coyotes in a 4-1 victory. It was the game winner.

Roenick is truly one of the Bad Boys of Hockey, but in our view this is much more important - As a child, he attended Hartford Whalers' games; during one visit, Hockey legend Gordie Howe picked up a pile of snow off the ice and threw it over the glass and on top of Roenick's head; Howe then continued to skate around but looked at Roenick again and winked. Roenick recalled what a lasting effect it had on him, noting, "I thought that was the coolest thing that ever happened in my whole life, it took three seconds. It was me, Gordie Howe and no one else...That moment stuck with me for years and years and years. It was little, it was small and it took nothing out of his power or time but it resonated with me my whole life. So, as a player, as I got older, I tried to reach out to fans, reach out to kids whether on the ice or on the street or in a restaurant. I try to do little things where I can make the same impression on a young child that Gordie Howe made on me. That's a gift that was given to me. And I made sure I did it, every, single day. Without the fans, without their support, the NHL would be nothing, the NFL would be nothing, basketball, baseball, you name it right down the line ... The two or three seconds you give each day to make sure you appreciate the people who appreciate you, goes a long way."