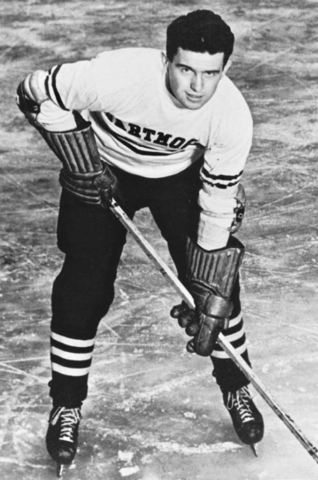 Rondeau had come out of Mt. St. Charles Academy in Woonsocket, Rhode Island as a heralded high school player. In 1939, his senior year, he centered the second line and was named All-State centre on a team composed entirely of Mt. St. Charles players. Mt. St. Charles was proclaimed unofficial nation champions based on their record of 21 wins and two losses as Rondeau won the league scoring title with 27 goals and 11 assists.

The following year, Rondeau was ineligible for further high school competition and joined the Boston Junior Olympics, then a Bruin's farm team. The Olympics played the major Eastern colleges and were runners-up in the national junior tournament. It was then that Eddie Jeremiah entered the picture convincing Rondeau to enroll at Dartmouth, rather than continuing with the Olympics He was a member of the 1942 NCAA championship team, playing on a line with Jack Riley and Bill Harrison. The team won 21 games and lost 2, while Rondeau led the nation in scoring with 45 goals and 32 assists.

Dartmouth would go on to win 41 straight games over a 4-year period. Rondeau captained the 1943 team as well, and also served as coach when Coach Eddie Jeremiah entered the Navy in mid-season. He was captain again in 1944.

Over his four-year college career Rondeau shattered nearly all of the school's scoring records, tallying 103 goals and 73 assists for an average 4.4 points per game. Rondeau still holds eight NCAA Collegiate Hockey records, including most goals and assists in one game (12 goals, 11 assists) vs Middlebury on the last college game of his career on February 8, 1944.

Drafted by The Boston Bruins, Rondeau entered the Marine Corps after graduation and played for Sand Diego and in the Pacific Coast League while stationed in California. A recreational swimming accident ended his active playing career in 1945.