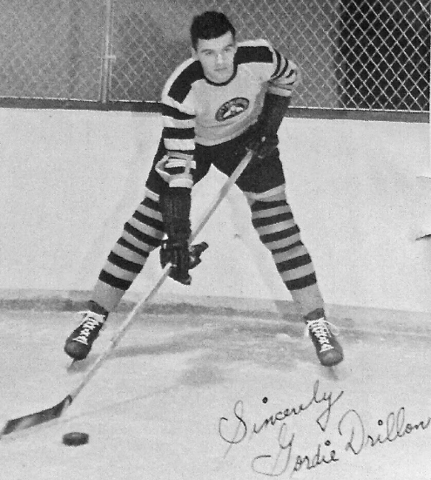 While growing up in Moncton, Drillon played for the Moncton Chalmers Club in 1929, Moncton Athletics 1930, Moncton Wheelers 1931, Moncton Hawks and Moncton Swifts during the 1932-33 season.

His goal scoring in the EAHL got him noticed by the Toronto Maple Leafs, who sign him for the start of the 1936-37 season. After playing 7 games for the Syracuse Stars, the Maple Leafs called Drillon up the the NHL, where he would play for the next 7 seasons.

A winger noted for his deadly accurate shot, he created a specific style of play that made him a leading scorer. Drillon's strong frame made it difficult for opposing defencemen to clear him from the front of the net. Drillon's style of Hockey was to park himself in front of the net and tip shots and swat at rebounds, and not worry about back-checking. "I spent ten years playing in the slot before anyone invented a name for it," he said later. This style of play would earn him the NHL scoring title in the 1937–38 season. Future stars such as Phil Esposito, Dino Ciccarelli and Dave Andreychuk emulated his innovative style with great success.

Drillon was a first team all-star in 1938 and 1939, a second team all-star in 1942, and NHL scoring leader and Lady Byng Trophy winner in 1938. He played in the 1939 Babe Siebert Memorial Game and won a Stanley Cup with Toronto in 1941-42 when the Maple Leafs made their legendary comeback against Detroit. Toronto was down three games to none in that best-of-seven final and Drillon was benched after the third game. The Maple Leafs went on to win four games in a row to capture the Stanley Cup, the first and only time a team has rallied from 3-0 down to win the Cup. Although newspapermen and reporters wrote that he was bitter about being benched, Drillon told a different story. "I don't mind talking about it," he said. "Hap Day just told me that my style of Hockey was not the same as the rest of the team, and we needed this to beat Detroit. And he was right. I was going bad at the time, no doubt about it."

Traded to the Montreal Canadiens for the 1943 season he finished second on the team in goals scored. At season's end, Drillon cut short his Hockey career and joined the Royal Canadian Air Force, serving for the remainder of World War II, and playing for the Toronto Army Daggers and Dartmouth RCAF, Valleyfield Braves and Halifax RCAF.

Drillon turned to coaching, as a player/coach with Charlottetown Legion, North Sydney Victorias and the Saint John Beavers from 1947 to 1950.

Drillond returned to his native New Brunswick where he was employed as a scout for the Toronto Maple Leafs, covering the Maritime provinces.