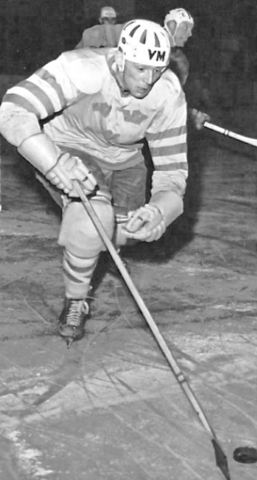 Nilsson started to play senior Hockey with Forshaga IF in 1952. In 1954, he moved to IK Göta, but played there only two seasons, before joining again with Forshaga, where he played until 1962.

Nilsson played the rest of his career with Leksands IF, from 1962-69. In 1966, Nilsson was awarded the Guldpucken, as the best player in Sweden during the 1965-66 season.

Nilsson then was awarded the Rinkens riddare (Knight of the rink) as the most sportsmanlike player of the Swedish Division I (SHL) in 1966-67.

Nilsson won his only Swedish Le Mat Trophy championship, winning it in his last season as an active player in 1969.

Nilsson first rose to prominence at the 1957 World Championship. On the final day, Tre Kronor played the Soviets with gold on the line, and Nilsson scored the opening goal to help Sweden play to a 4-4 tie, good enough for gold.

Nilsson is most famous for one game in particular, though. On March 13, 1962, during the World Championship in Colorado Springs, Colorado, Nilsson helped Tre Kronor defeat Canada, 5-3. It marked the first win by Sweden over the powerhouse Canadians in 13 tries going back to 1931.

Nilsson scored one goal early in the second period to make it 3-0, and then Canada mounted a ferocious comeback that was stymied by an empty-netter from Nilsson. The radio call by announcer Lennart Hylands is Sweden’s equivalent to Foster Hewitt’s “Henderson has scored for Canada!” or Al Michaels’s “Do you believe in miracles?”

Hylands screamed, “Den glider in i maal! Den glider in i m-a-a-l!!” as Nilsson’s shot slid into the empty net and assured Sweden of the historic win. Sweden went on to win all seven games in 1962 and claim gold.

Nilsson represented Sweden at the Winter Olympics in 1956, 1960 and 1964, finishing in fourth, fifth and second place (Silver Medal), respectively. Nils was selected as the best forward of the 1960 Olympic tournament, despite his team finishing a disappointing fifth.

Nilsson scored 131 goals in his career, which is the second-best scoring result in Sweden history, behind that of Sven Tumba.

After retiring as a player, Nilsson remained very active in the game, working as a product developer for Jofa, Sweden’s most famous manufacturer.

Nils Nilsson was inducted into the International Ice Hockey Federation / IIHF Hall of Fame in 2002.

Nisse Nilsson was Elected to the Swedish Hockey Hall of Fame in 2012.