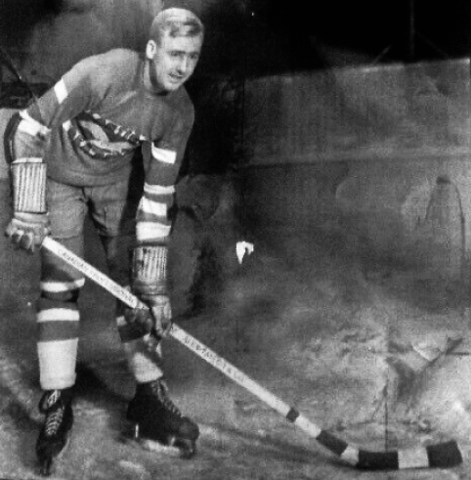 Anderson was born in Norway and immigrated to Swampscott, Massachusetts with his parents at an early age, and would learn to play Hockey there, along with other sports that he excelled in.
Anderson graduated from Swampscott High School in 1976, where he starred as a quarterback in football, a shortstop in baseball and as a Hockey player.

Anderson then played amateur Hockey for the Boston Hockey Club, from the North Shore to Boston, and was selected by United States to play for their team at the 1931 World Ice Hockey Championships in Krynicka, Poland. His coach on the United States team - Walter Brown. Anderson was/is known by Hockey USA by the name Osborne Anderson, his real first name is spelt Osbjorn. Anderson helped the USA team win the Silver Medal. The team had 3 shutouts, allowed only 1 goal in the first game 1 victory and 2 goals to the champion Canadian team in the final game.

Ty Anderson was then selected to the 1932 United States Olympic Team. Only four teams participated in ice Hockey, which was played in Lake Placid, New York. Only two European associations made the trip due to the worldwide Great Depression. Anderson played in all 6 games, scoring 1 goal, 1 assist, helping his team win the Silver Medal, as Canada defended it's Gold Medal.

Anderson turned pro when he returned to the United States, playing for the Atlantic City Sea Gulls, first in the Tri-State Hockey league / TSHL for the 1932-33 season, helping them win the 1933 Boardwalk Trophy (Cup). The Atlantic City Sea Gulls then joined the new Eastern Amateur Hockey League / EAHL, starting the 1933-34 season. Anderson would be a starting defenceman for the Sea Gulls for the next 6 seasons.

He was cheered and respected in almost every arena. Anderson would gain a reputation as one of the most gentlemanly players in the EAHL, averaging only 11 penalty minutes a year. He was so respected in the league that on March 9, 1941 he would receive a gold watch for his EAHL services on what was called "Ty Anderson Day", an event that was held by the New York Rovers at MSG while Anderson was a member of the visiting Boston Olympics.

Anderson retired in the spring of 1947, and moved back to Swampscott. He became the high school's ice Hockey head coach. Anderson would coach the team from 1948 to 1972, leading them to three North Shore League championships (1958, 1959 and 1963).