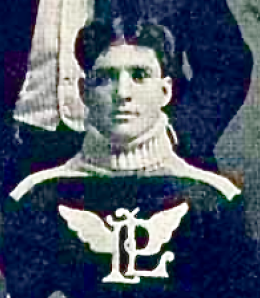 If Renfrew, Ontario is the birth place or area where Jones was born, then he would be part of the Algonquin territory.

Newspaper reports from his playing days, referred to Jones as "A Full Blooded Indian"

Not much is known about Jones in his early days of Hockey, and where he learned to play the position of goaltender, but the area of Renfrew to Montreal was a hotbed of Hockey in those days.

Jones played amateur goal for the St. Paul Virginias in the Twin City Hockey League / TCHL in Minnesota, helping them win the 1st Dunbar Cup in March, 1902 as champions of the new TCHL.

The Portage Lake Hockey team had visited St. Paul in January of 1902, playing 2 games vs the local teams. Portage Lake defeated the Virginias 2-0 at Virginia Rink on Saturday the 25th. Jones, playing goal for St. Paul, was the star of the game. The Virginias later travelled to Hancock, Michigan to play the Portage Lake team. St. Paul lost the game 11-2 before a crowd of 700 at the Palace Ice Rink, but the goaltending of Jones had impressed Hockey pioneer Jack "Doc" Gibson, who signed him to the Portage Lake Hockey Team. Jones played his 1st game with Portage Lake in December, 1902. Jones was termed by local Houghton-Hancock Hockey followers to be the best goaltender that appeared in Houghton to that date.

Joe "Chief" Jones as he was know known, then joined the International Hockey League / IHL Michigan Sault Ste. Marie Indians (Michigan Soo Indians) for the 1903-4 season, and would play in Michigan for the next 4 seasons.

Chief Jones was voted to the IHL All Star Team in the spring of 1905 by the readers of the Soo Evening News, and then after the 1905-6 season, famed referee Chaucer Elliot picked his own IHL All Star Team, and included Chief Jones as the goaltender on his team.

Jones then joined the Cobalt Silver Kings in the Timiskaming Professional Hockey League / TPHL in 1908, backstopping the Silver Kings to the 1909 Temiskaming Hockey Cup championship.

The Cobalt Silver Kings were founding members of the new National Hockey Association / NHA for the start of the 1909-10 season, and Chief Jones was their goalie. He didn't do as well in the NHA league, with only 4 wins to go with 8 losses, and a whopping 104 Goals against / GA. After the initial NHA season, the Silver Kings returned to play in the TPHL.

Chief Jones signed with the Waterloo Colts (Waterloo Professionals) of the Ontario Professional Hockey League / OPHL for the 1910-11 season. He won 9 games and lost 7, and would retire from professional play at seasons end.