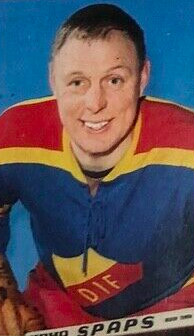 Björn participated at nine IIHF World Championship tournaments for the Sweden Men's National Ice Hockey Team, winning gold in 1953 and 1957 and two bronze medals in 1954 and 1958.

Björn who captained the 1957 World Championship team that defeated the Soviet team in Moscow in front of the largest crowd to witness a ice Hockey game in the 20th century (50,000 plus), was asked to lead the singing for the national anthem, where he apparently forgot the words to the Swedish National anthem, so began singing the 2nd National anthem of Sweden, a fun drinking song called "Helan går" - his teammates, coaches and supporters quickly joined in, and this has added to Björn's folklore in Sweden.

Björn was captain of Djurgården IF in nine seasons.

Björn was the 2nd player to be inducted / Elected to the Swedish Hockey Hall of Fame on February 9, 2012.

Lars "Lasse" Björn was inducted into the International Ice Hockey Federation Hall of Fame in 1998.