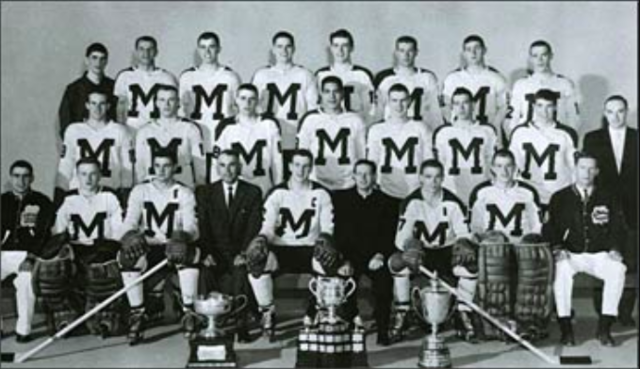 The best-of-seven Memorial Cup final featured the Toronto St. Michael’s Majors, back for the first time in 14 years, and the Edmonton Oil Kings, played at the Edmonton Gardens.

Game One, played on April 25, 1961, saw both teams start tentatively, feeling out their opponent, before St. Mike's took the game 4-0. Gerry Cheevers posted the shutout.

Game Two was far more wide open than the opening contest. Netminder Cheevers "gave Oil King shooters the jitters with his antics, his glamorous glove and splendid pad saves," reported The Globe and Mail. Cheevers came within 6:35 of a second consecutive shutout before Edmonton scored late in the third period, but it was a moot point as the Majors prevailed 4-1.

With a 4-2 victory in Game Three, the Majors put a stranglehold on the series with an almost insurmountable 3-0 lead in the best-of-seven series, but with their backs against the wall, the Edmonton Oil Kings staved off elimination with a 5-4 victory in Game Four. In the fifth game, Edmonton doubled the Majors 4-2 to crawl back into contention.

Father Bauer employed an integral piece of strategy prior to Game Six, played on May 5. The coach took the team away for some solitude, where the excitement and stress of Hockey were temporarily replaced with boating, quoits and baseball. The drastic change of pace worked wonders, and the Majors won game 6, scoring a 4-2 victory before 7,159 fans.

Father David Bauer later reflected on the 1960-61 St. Michael's Majors. "Repeatedly, I have said that the 1960-61 edition of the Majors is the greatest group of boys, taken as a team, that I have encountered in my life."