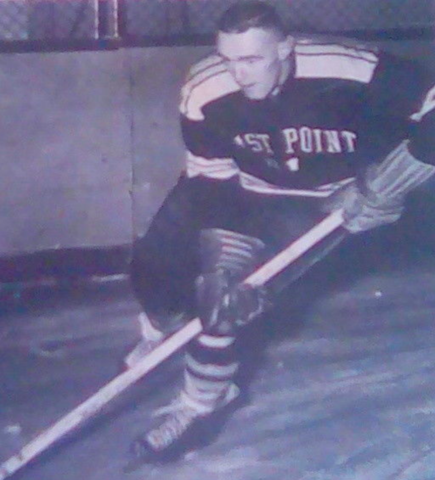 In 1948, Riley was part of an American ice Hockey team (AHA) that was disqualified as two rival teams arrived for the Americans at the St. Moritz Olympics. The U.S. team Riley played for was allowed to play, and finished 4th, but their results were not allowed to be official and considered disqualified. Riley also represented USA Hockey at the 1949 IIHF World Championships as a player / coach - The U.S. won a bronze medal.

Riley then began his Army coaching career in 1950 with the Army Cadet team (Army West Point) in the NCAA Division 1, winning just 2 games in a 13 game schedule. This would be the start of a very long coaching career for him, Riley coached a 542-343-20 record during his remarkable 36-year career at the West Point Hockey helm, and was named NCAA “Coach of the Year” in 1957 and 1960 winning the Spencer Penrose Award. He guided Army to 29 winning seasons and led the Black Knights to a school-record 28 victories during the 1983-84 campaign.

When Riley retired from coaching at West Point, he was replaced by one of his sons, Rob Riley in 1986. Another son, Brian Riley, took over the job from Rob in 2004.

Riley is a two-time winner of the Lester Patrick Trophy, to honor a recipient's contribution to ice Hockey in the United States. In 1986 as a coach and 2002 as a member of the Olympic gold medal-winning United States Hockey team of 1960.

Jack Riley was inducted into the United States Hockey Hall of Fame in 1979, and again in 2000, as part of the 1960 Olympic Ice Hockey team.

Jack Riley was inducted into the Massachusetts Hall of Fame in 1995.

Jack Riley was inducted into the IIHF Hall of Fame in 1998.

Jack Riley was inducted into the Army Sports Hall of Fame in 2004.