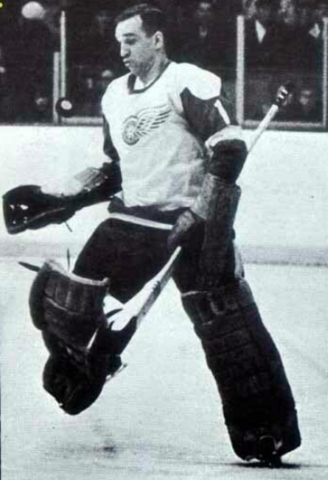 Crozier spent his junior career with the St. Catharines Teepees of the Ontario Hockey Association / OHA from 1959 to 1962. Crozier helped the Teepees win the 1960 J. Ross Robertson Cup as OHA champions, the 1960 George Richardson Memorial Trophy as Eastern Canada champions, and the 1960 Memorial Cup championship. Crozier was also a OHA-Jr. First All-Star Team in 1960, 1961 & 1962.
During his time with the Teepees, Crozier developed his first ulcer (pancreatitis), a problem that would plague him for the rest of his career.

Because of his small frame and size (5 ft 8 in (173 cm) - 160 lbs (73 kg), he was not a favourite with scouts or critics. Despite this, the Buffalo Bisons of the American Hockey League / AHL recruited Crozier to fill in for their injured starting goaltender, Denis DeJordy in 1961. In three games, Crozier recorded two wins and a 2.31 goals against average (GAA). He returned to the Teepees for the 1961–62 season, during which he also played in 1 game with the Bisons and 3 games with the Sault Ste. Marie Thunderbirds of the Eastern Professional Hockey League / EPHL.

The Chicago Black Hawks owned the NHL rights to Crozier, and traded him to the Detroit Red Wings with Ron Ingram for Howie Young, June 5, 1963. The Red Wings sent Crozier to their minor league team, the AHL Pittsburgh Hornets for the 1963-64 season, where he won the Harry "Hap" Holmes Memorial Award (fewest goals against), and the Dudley "Red" Garrett Memorial Award for AHL Rookie of the Year 1964. Crozier was voted to the AHL Second All-Star Team. Crozier also made his NHL debut that season. The Red Wings' starting goaltender, Terry Sawchuk, was injured and Crozier was called up as a substitute. In only 15 games, he impressed management so well that he was made the Red Wings' new starting goaltender. Sawchuk was left unprotected by the Red Wings during the intraleague waiver draft in the off-season and was picked up by the Toronto Maple Leafs. This made Crozier the Red Wings' starting goaltender at the age of 22.

In the 1974–75 season, Crozier posted 17 wins and two losses, helping the Sabres to first place in the Adams Division. During the playoffs, Crozier played five games, including two in the Stanley Cup Finals. After eliminating the Black Hawks and the Canadiens, the Sabres faced the Philadelphia Flyers in the Stanley Cup Finals. Game three of the Finals in Buffalo was known as the "Fog Game"; a heat wave in May hit the arena and with no air conditioning inside, the temperature increased. Fog started to develop and soon visibility decreased. Gerry Desjardins was the starting goaltender but after allowing three goals in the first period, he was replaced by Crozier. Crozier allowed one goal during the rest of the game and helped the Sabres win 5–4 in overtime. With the Sabres trailing in the series 3–2, Crozier was selected to start game six and he shut out the Flyers in the first two periods. In the third period the Flyers score the only 2 goals of the game, and they won the 1975 Stanley Cup. For the third time, Crozier's team lost in the finals.