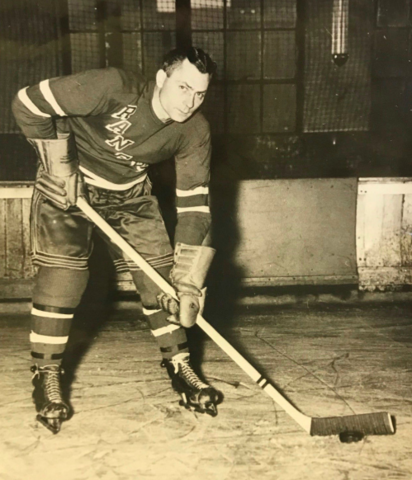 Hextall grew up in Poplar Point, Manitoba. He played his first Hockey there, winning the Manitoba juvenile championship in 1929–30. He played junior Hockey with the Winnipeg Monarchs in 1931–32 before switching to the Portage Terriers with whom he won the Manitoba Junior Hockey League scoring title in 1932–33.

Hextall began his pro career in 1933–34 with the Vancouver Lions of the North West Hockey League / NWHL. He played three seasons in Vancouver, leading the NWHL in scoring with 27 goals in 1935–36, and followed up the next season with another league-leading goal total of 27, this time while playing with the Philadelphia Ramblers of the International-American Hockey League.

The New York Rangers brought Hextall up for three games in 1937, recording one assist.

Hextall would play fulltime with the Rangers the following year playing on his "off wing," many years before the tactic was to become common practice in the league. Hextall found that he had a better shooting angle, as a left-handed shot, by cutting in on goal from the right wing. Using the strategy to his advantage, he led the NHL in goals scored in the 1939-40 and 1940-41 seasons and won the NHL scoring race outright in 1941-42. Hextall also was named a first-team NHL All-Star for the first time in the 1939-40 season.

Hextall was one of the Rangers' top players during the 1940 Stanley Cup Final against the Toronto Maple Leafs. Hextall scored a hat trick against the Maple Leafs and added an assist to lead the Rangers to a come from behind victory in game two of the series, and scored perhaps the biggest goal in New York Rangers history on April 13, 1940, in overtime, in game six of the Stanley Cup finals. In Toronto that night, at the 2:07 mark of the fourth period, Hextall beat legendary goaltender Turk Broda to give New York a 3-2 victory in the game and a 4-2 series win to claim the 1940 Stanley Cup championship. "I took a pass from Dutch Hiller and Phil Watson," Hextall fondly remembered years later. "The puck came out from behind the net and I took a backhand shot to put it past Broda."

A second All-Star selection followed in 1940–41 as Hextall again led the NHL in goal scoring and finished in a tie for second in overall points. He led the league in points in the 1941–42 season; with his total of 56 (24 goals) points. Additionally, he was named to the first All-Star team for the third consecutive season.

Hextall scored career highs in goals, 27 and points, 59, in 1942–43 and was again named a post-season All-Star, this time on the second team. In addition to being a top scorer, Hextall was also durable. He appeared in 340 consecutive games for the Rangers between 1937 and 1944. His streak came to an end in 1944 when Canadian war authorities denied him a permit to cross into the United States. The Rangers' attempts to regain his services were unsuccessful, Unable to play in the NHL, Hextall regained his amateur status and played senior Hockey briefly with the St. Catharines Saints in the Ontario Hockey Association's senior division.

The conclusion of World War II allowed Hextall to return to the Rangers for the 1945–46 season, however his return was short-lived. He was hospitalized with a liver ailment, an illness that ruled him out of the season after just three games, and led to fears it would end his career. Hextall overcame doctors expectations, appearing in all 60 games for the Rangers in the 1946–47 season. After a final season in the NHL in 1947–48, Hextall split the 1948–49 American Hockey League season between the Cleveland Barons and Washington Lions before announcing his retirement.

After retirement, Hextall turned to coaching the Minnedosa Jets from 1954 to 1957 in the Big Six Hockey League in Manitoba.

Bryan Hextall was the first of three generations of Hextalls in the NHL. His sons Bryan Jr. and Dennis both played well over 500 games in the league and his grandson Ron (son of Bryan Jr.) appeared in over 700 regular season and playoff games as a goaltender with the Philadelphia Flyers, Quebec Nordiques, and New York Islanders.

Bryan Hextall was inducted into the Hockey Hall of Fame in 1969.

Bryan Aldwyn Hextall is a "Honoured Member" of the Manitoba Hockey Hall of Fame, inducted in 1969.

In 1970, Hextall received a Manitoba Centennial Medal for his contribution to sports.

Bryan Hextall was inducted into the Manitoba Sports Hall of Fame in 1985.

In 2000, Hextall was voted to Manitoba's All-Century Second All-Star Team.