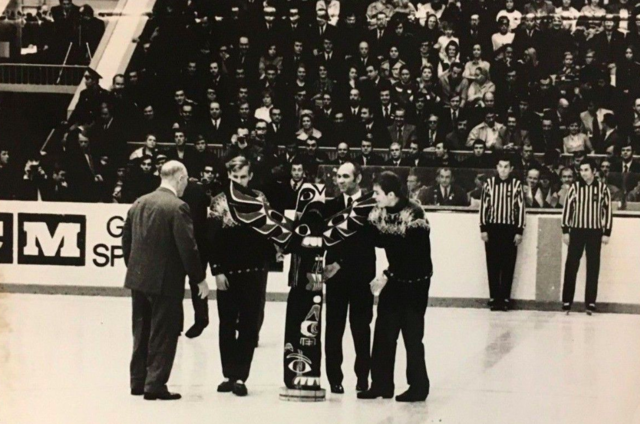 The Totem Pole presented before game 8 at the Luzhniki Palace of Sports, 1972 Summit Series in Moscow, Russia. September 28, 1972.

There was ill will between the two teams, and the refereeing choices prior to the presentation of the totem pole as a gift from Team Canada, which had been brought over from Canada to bring out on the ice as a gift and they (Soviets) told Team Canada it wasn't in the program.

The pre-game presentation was cancelled by the Soviets, but restored on the insistence of Team Canada, as they said "Look, you got to present your petrushka dolls in Canada; this is our gift and we're going to bring it on the ice."

According to Coach Sinden, Alan Eagleson stated that they “were going to take this totem pole and bring it to center ice and they’ll have to take it or skate around it the whole game". So, before the faceoff, we (Team Canada) snuck on the ice with this thing, made our presentation and nothing happened.