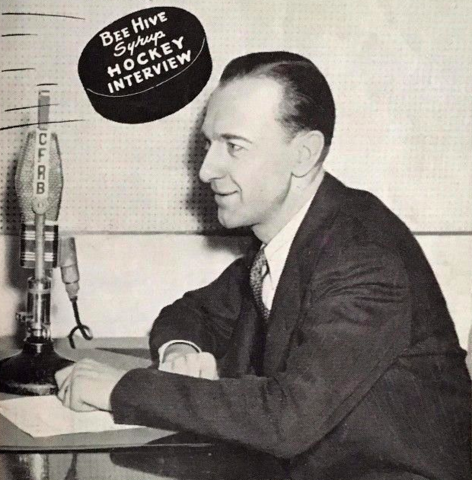 Sportsviews were believed to be the first daily sportscasts in Canada.

J. Wesley McKnight - Born 1909 in Tottenham, Ontario – Died June 6, 1968 in Toronto, Ontario was a Canadian television and radio personality who did play-by-play for many sports broadcasts.

McKnight graduated from the University of Toronto and in 1926 joined CJYC, a short-lived Toronto Northern Electric station. He moved in 1927 to CKGW Toronto, owned by distillers Gooderham and Wortz, and in 1928 joined CFRB Toronto where he was appointed sports director the same year.

McKnight was an all-round sportsman, playing excellent Hockey, golf, tennis and baseball – he was scouted by the Yankees – and believed sports fans were a strong potential audience for radio. He became Canada's first regular sports commentator with a trademark opening: "How do you do, everybody?" Audience approval was instant.

A chat in 1932 with Charlie Conacher of the Maple Leafs launched his long-running Bee Hive–sponsored Saturday night Hockey interview series. Players received twenty-five dollars for appearing on the show, which aired before Hockey Night in Canada (CFRB simulcast the radio version, where McKnight appeared on the Hot Stove League show during intermissions, with CBC for many years).

By 1934 he was interviewing players in Canada's first regularly scheduled sports talk, Sportsviews, a 15-minute show sponsored by Bee Hive Corn Syrup and carried nationally on Saturday at 6:45 p.m. before the Imperial Esso Hockey Broadcast. That was years before Hockey Night in Canada became a CBC fixture. The Bee Hive sponsorship lasted 40 years and remains a record for broadcast sponsorship. Wes was a charter member of the original Hot Stove League of Maple Leaf Gardens.

On weekdays, Wes had a long-running sports commentary on CFRB at 6:40 p.m. following the news by Jim Hunter and Jack Dennett.

Wes did play-by-play of the Toronto Argonauts of the Canadian Football League and Grey Cup games for about 30 years. His initial coverage of Hockey and football was soon followed by running commentary of other top events like the King's Plate and the Canadian Open golf tournament.

In addition to his sportscasting, for years Wes was also CFRB's program director. On the death in 1959 of Harry Sedgwick, CFRB's president and managing director, Wes was appointed manager and held that post until 1965. He retired in 1966, at which time he was manager of public relations.

Wes McKnight was inducted into the Canadian Football Hall of Fame and Museum, Football Reporters of Canada wing in 1985.