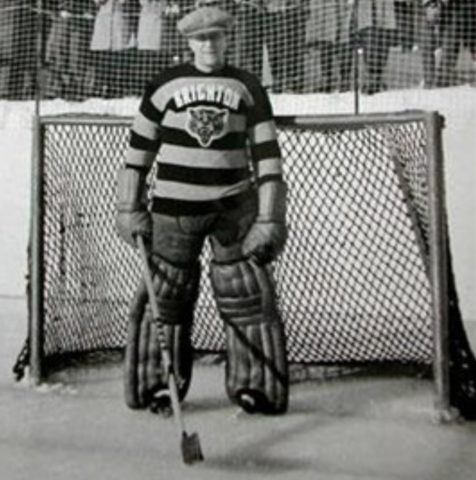 Originally from Swift Current, Saskatchewan, Hutchinson went to Britain in 1936 to play for the Earls Court Rangers of the English National League / ENL.

Hutchinson had a poor start to his British ice Hockey career, giving up 232 goals in forty games. Deciding his future in ice Hockey looked bleak, Hutchinson worked as a carpenter at the Earls Court Exhibition Centre. When the goaltender who replaced Hutchinson was injured, he was asked to play again. "Had it not been for that quirk of fate, British Ice Hockey might have lost one of its finest net-minders of all time"

Hutchinson played for the Rangers until the start of the Second World War and went to work at the Hawker aircraft factory, occasionally playing during the war years as guest for the RCAF Ice Hockey Team. With Wembley re-opening after the war, his first stop was to apply for the net-minding position with the Wembley Lions, and then joined the Brighton Tigers in 1946

Hutchinson helped the Brighton Tigers win the English National League championship in 1946–47 and the 1947–48 seasons, and also the English Autumn Cup (Autumn Cup) in 1946 and 1950.

After retiring from Hockey he became stage manager of the Tom Arnold Ice Shows at the Brighton Sports Stadium and later ran a number of public houses in Sussex.

Gib once said “in those days we played on beer and guts.”

Hutchinson also stared as a second-baseman for the Romford Wasps in British Baseball.

Gib Hutchinson was inducted to the British Ice Hockey Hall of Fame in 1951.