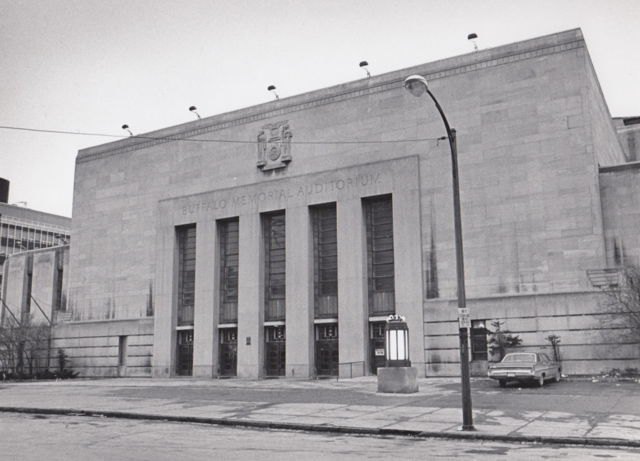 The American Hockey League's Buffalo Bisons played 30 seasons at the Buffalo Memorial Auditorium, beginning with the 1940–41 season. The Bisons won five Calder Cup championships, with the last coming in 1970 during the franchise's final game. The team folded in 1970 after the National Hockey League awarded Buffalo an expansion team.

The Buffalo Sabres made their Memorial Auditorium debut on October 15, 1970 in a game attended by NHL President Clarence Campbell that began with a ceremonial faceoff between Sabres captain Floyd Smith and Montreal Canadiens captain Jean Beliveau. The Sabres' Roger Crozier made 53 saves in a 3-0 loss.

The Sabres occupied the Auditorium through the 1995–96 season, when they moved to the nearby Marine Midland Arena. Michael Peca scored the last in-game goal at the Aud while Pat LaFontaine put in a ceremonial goal after the 4–1 win over the Hartford Whalers. It was the last arena where the ice sheet fell short of the league-mandated 200 feet by 85 feet size (though Maple Leaf Gardens had irregularly shaped corners).

Memorial Auditorium hosted the 1978 NHL All-Star Game on January 24, 1978. Two members of the Sabres' "French Connection" line—Gilbert Perreault and Rick Martin—played for the Wales Conference. Both had a significant impact: Martin scored a goal with 1:39 remaining in regulation to tie the game at 2–2 and force overtime, and Perreault scored the game-winning goal 3:55 into overtime to defeat the Campbell Conference 3–2.

The Edmonton Oilers' Wayne Gretzky made NHL history at The Aud on February 24, 1982, when he scored a natural hat trick during the game's final seven minutes to help defeat the Sabres 6–3. Gretzky broke Phil Esposito's record for goals in a season (76) with the hat trick's first goal, his 77th of the season.

On January 4, 1976, the Sabres played Krylia Sovietov as part of a "Super Series" between the Soviet Union's two best club teams—CSKA Moscow and Krylia Sovietov (named "Red Army" and "Soviet Wings" respectively, during the series) and eight of the NHL's top teams. The Sabres’ 12-6 victory over the 1974 Soviet league and European Cup champions was the worst defeat ever for a professional Soviet Hockey club.