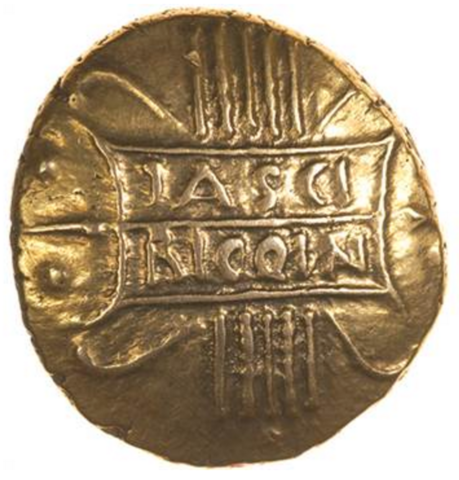 Tasciovanus (Tasciovanos) was a King Celtic who reigned in the first century BC. AD on peoples Brittonic of Catuvellauni and Trinovantes in the southeast of the current England. His reign lasted fifteen years

Tasciovanus was the grandson, or perhaps the son, of Cassivellaunus, and the father of Cunobelin and Epaticcus. He was ruler of the tribe from circa 20 BC. The Catuvellauni tribe occupied the the area of today's South Midlands going into Essex and southern Suffolk with their capital at St. Albans. He was also the first to renew hostilities towards the Trinovantes, flouting the long-standing agreement between Caesar and his own grandfather Cassivellaunus. Between 15 BC and AD 10 he issued a series of coins bearing the mint mark CAMV indicating that for a time at least, he took possession of the Trinovantian capital; but it appears that he withdrew following the advent of Augustus in Gaul.

His later coin issues bear the inscription TASCIO RICON and TASCI RICOIN where the word 'rigon' is usually translated as 'king'.

Tasciovanus appears in the Historia Regum Britanniae (circa 1135 ) of Geoffrey of Monmouth as the Tenuantius . The Historia is a literary construction that tells the legendary story of the legendary kings of Britain.