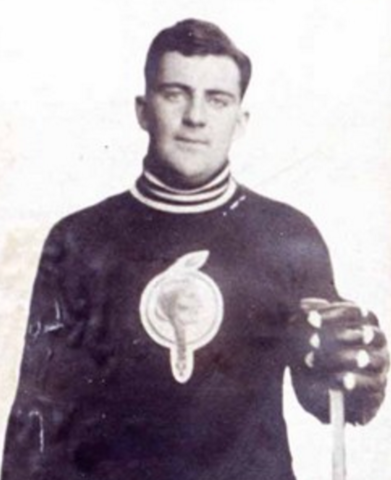 The McNamara brothers were known as the "The Dynamite Twins" (though they weren't twins) because of their bone-crunching body checks. A younger brother Hal also played professionally in this early era.

McNamara was a big, rugged defenseman and was in demand in those early years. McNamara played with four different clubs in four different leagues between 1908-09 and 1912-13.

McNamara was never a real offensive threat but did manage to score 15 goals in 16 games with the Waterloo Colts of the Ontario Professional Hockey League in 1910-11.

McNamara was one of the best open ice checkers of his day, and played with his only Stanley Cup winning team in Toronto as a member of the Toronto Blueshirts team of 1913-14. He stayed in Toronto to play the following year with the Toronto Shamrocks and then returned to the Blueshirts before joining the Canadian Army during the World War I.

McNamara was a member of the 228th Battalion team "Northern Fusiliers" that participated in the National Hockey Association before having to drop out of the league when they were ordered overseas on February 10, 1917.

McNamara served as Captain, then Major, in 6th CRT and returned on the Scotian arriving in Saint John, N.B. on April 4, 1919.

After returning from the service, McNamara became the coach of the Sault Ste. Marie Greyhounds and lead the team to the Allan Cup championship in 1924.

The George McNamara Trophy was presented to the Northern Ontario Hockey Association / N.O.H.A. to be emblematic of the Championship of the Southern section of the Junior “A” category. George McNamara was one of the most ardent hockey fans in the N.O.H.A.

George McNamara was inducted into the Hockey Hall of Fame in 1958.