Shinny Sticks made of Oak or Tan Oak, and used by the Northern Pomo People 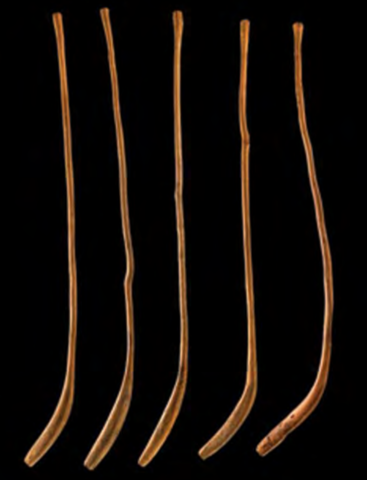 Shinny Sticks (Tossle Sticks) made of Oak or Tan Oak, and used by the Northern Pomo People.

Pomo people played on fields ranging from a quarter to a half mile long. The rules allowed for picking the ball up and batting it in the air as well as moving it along the ground.

The Shinny balls used by the Pomo people were made from the knot of a Laurel Root, and were about 4 inches in diameter.

The Pomo people are an indigenous people of California. The historic Pomo territory was in northern California.

The Pomo Indian tribe is a linguistic branch of Native American of Northern California. Their historic territory in the past was on the Pacific Coast between Cleone and Duncans Point. The Pomo Indians preferred to live in small groups which they called "bands". Their bands were linked by geography, lineage, and marriage.
The Pomo people was composed of hundreds of independent communities.

The Shinny Sticks in this image are courtesy of Field Museum of Natural History, Chicago, Illinois