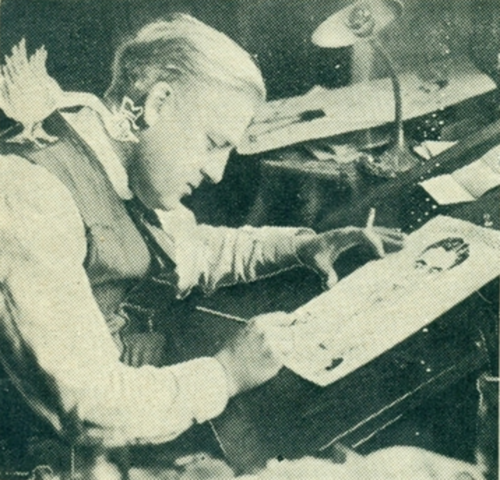 Skuce was the first Canadian cartoonist to ever have a full page comic strip in Canada, according to his editor of the Toronto Sunday World, but would become famous as a sports cartoonist.

Skuce started his cartooning career with the Ottawa Journal. Moving to Toronto, he was employed by the Toronto World, the Star, the Mail and Empire; and for 14 years was art editor of the Sunday World.

In his youth, Skuce won world and Canadian honors for paddling while a member of the Britannia Club, Ottawa. He also paddled for the Parkdale Canoe Club and won numerous cups. He played rugby and Hockey. It as this background of sport that enabled him to turn out detailed, accurate cartoons for the sports pages.

After the Toronto Maple Leafs won the Stanley Cup in 1932, Skuce produced the highly collectible commemorative coasters for O’Keefe's Breweries and a Jig-Saw puzzle featuring portraits of the Maple Leafs players for Dr. Gardiner’s Toothpaste.
During this time, Skuce also created coasters for various beers for the rest of the decade.

In 1936, Skuce contributed to the Canadian sports scene by suggesting a concept to sculptor Emmanuel Hahn that resulted in the final design of the Lou Marsh Trophy that is presented annually to the outstanding Canadian athlete and was 1st won by Phil Edwards that year for track and field.

In 1948, Sweet Caporal cigarettes had Skuce do drawings on the 1948 / 1949 Montreal Canadiens / The Forum calendar

Skuce also made public appearances, often at children’s shows, using his Cartoonograph to project his drawing board onto a screen for audiences to watch him draw in real time.

Skuce was chairman / president of the Toronto branch of the American Guild of Variety Artists.