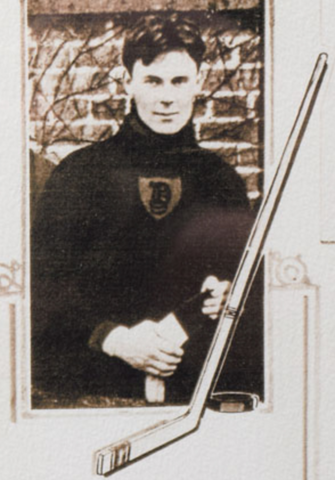 Hamber was educated at the Anglican St. John's College for Boys in Winnipeg, where his father was headmaster.

Hamber was possibly the best Canadian all-round athlete of his time. At St. John's College, he was captain of the rugby team, which he lead to a Western Canadian championship in 1901. He became associated with the Toronto Argonauts in their glory years from 1902-06, and was captain of all three of their teams -- Hockey, football and rowing. He rowed for the Argos at Henley in 1902.

Hamber played Hockey for St. John's College in Winnipeg from 1896 to 1901 and 1904, winning the Manitoba Inter-Collegiate Hockey Championship in 1898.

Hamber then played for the Winnipeg Hockey Club and the Dominion Bank Hockey team, winning the Winnipeg Bankers Hockey League in 1900 and 1901.

Hamber also played for the Dominion Bank Hockey team in Toronto, Ontario, where he was team captain from 1902 to 1903 in the Toronto Bank League.

Hamber also played for the Toronto Argonauts in 1902-03 where he captained the team. Hamber rejoined the Argonauts late in 1904, helping them to the OHA championship final, and also was with them for one final season in 1905.

Hamber was captain of the Princes Ice Hockey Club, at the Prince's Skating Club in London, England in 1911. The British Ice Hockey Association was founded at the rink in 1914.

Tammy's biggest Hockey moment was when he played for the Manitoba Hockey Association champions, Winnipeg Rowing Club in the Stanley Cup challenge against the Ottawa Hockey Club / Ottawa Silver Seven on December 30, 1903 (9 to 1 loss), January 1 (6 to 2 win), and January 4 (2 to 0 loss), 1904. After the first game of the series, Winnipeg added Eric Werge Hamber from the Toronto Argonauts Ice Hockey team. There was controversy over Hamber's participation because he had not qualified to play in the Stanley Cup challenge, as he didn’t play in the western playoffs and then he joined the Winnipeg Rowing Club in Ottawa, where the games were played at the Aberdeen Pavilion.

Hamber's professional career was in banking (Dominion Bank of Canada). In April 1902 he was transferred to Toronto. Over the next few years, promotions within the bank had him moving between Winnipeg and Toronto. By 1906 he was transferred to Calgary as the manager of the Dominion Bank. In 1907, he was moved to Vancouver, and in 1910 to London, England where he became the manager of the bank's main office. A year later, he met and courted Aldyen Hendry, who was visiting London with her parents. The couple announced plans to marry and insisted that the ceremony take place in London, thus annoying the elder Hendry, who was reluctant to cancel the berths he had already booked for his family and Hamber on the maiden voyage of the Titanic.

Hamber married Aldyen Hendry in 1912, the only daughter of John Hendry, a prominent businessman and industrialist. Eric Hamber became general manager and vice-president of Hendry's vast network of logging, mining, and transportation companies. After Hendry's death in 1916, Hamber was left wholly in charge of the operation until the mill site was sold to the Vancouver Harbour Commission in 1925.

Hamber was appointed British Columbia's fifteenth Lieutenant Governor on May 1, 1936 to 1941, achieving considerable popularity. During that time, the Hamber's entertained Franklin Delano Roosevelt (in May 1937), and King George VI and Queen Elizabeth during their Dominion tour in 1939.

In addition to his business and political involvements, Hamber served throughout his career on the Board of Directors of several large companies, and was a leading figure in public service organizations like the Vancouver General Hospital, the Boys Scouts, the Red Cross and the B.C. Cancer Foundation. He was made an honorary Colonel of the Seaforth Highlanders. In 1944, he became Chancellor of the University of British Columbia, a position he held for seven years. In 1946, he was made a Companion of the Order of St Michael and St George.

Hamber was known on the West Coast for the Lady Van, an R class racing sloop, and for the Vencendor, a three masted, iron-hulled former British training ship which was the finest yacht in the RVYC regattas of the Twenties and Thirties. He developed a passion for thoroughbred racing, and maintained a 1,000-acre stock farm in Coquitlam called the Minnekhada Ranch, now a Regional Park. In June of 1932 Hamber purchased the Farm under the title of ‘Minnekhada Stock Farm Limited’ for $8,700. Hamber envisioned the Farm as a location where he could move his racehorse company. In 1930 Hamber purchased the O’Connell Stables and amalgamated it with his other horseracing venture, Greencroft Stables Limited. Another influence on the development of the Farm came soon after Hamber bought Minnekhada. Hamber had been a member of the Vancouver Polo Club throughout his life in Vancouver. He sat as the president of the club from 1926 to 1931. The Polo Club’s home field was Brighouse Park in Richmond. In 1929 he won the BC Polo Championship with HRH Prince Henry, A.E. Austin, Col. R.S. Chaplin and Col. Clarence Wallace. When the Depression began the Vancouver Polo Club disbanded due to financial reasons. Many of Hamber’s friends tried to convince him to move the polo operation to Minnekhada. They argued that it would not be too difficult since Minnekhada was as “level as a tennis court. Hamber agreed and purchased or acquired much of the club’s equipment and brought it to Minnekhada around 1934. The Farm would have remained solely a polo and horse breeding operation if it was not for his wife Aldyen. Mrs. Hamber loved animals and convinced Eric to make Minnekhada into a real farm. Livestock was brought in and crops were diversified. Prior to Aldyen’s influence, Eric had envisioned the Farm to be strictly horses, hay and oats. The only buildings Eric had worried about upgrading were the stables, which he combined into one large stable with an adjoining hay barn. Under the new direction set by Aldyen, more workers were hired to construct additional buildings and install a drainage system.

Both Eric Hamber Secondary School and one of the residences in Place Vanier on the UBC Vancouver campus are named after Eric Hamber and his wife - Aldyen Hamber House. As is Hamber Provincial Park on the BC side of the Canadian Rockies. Theatre BC's most prestigious award also bears his name - The Eric Hamber Award. At St. John's College, the Hamber Dining Hall is also named after him.

When Queen Elizabeth II was married in 1947, Hamber and his wife were the only Canadian private guests.