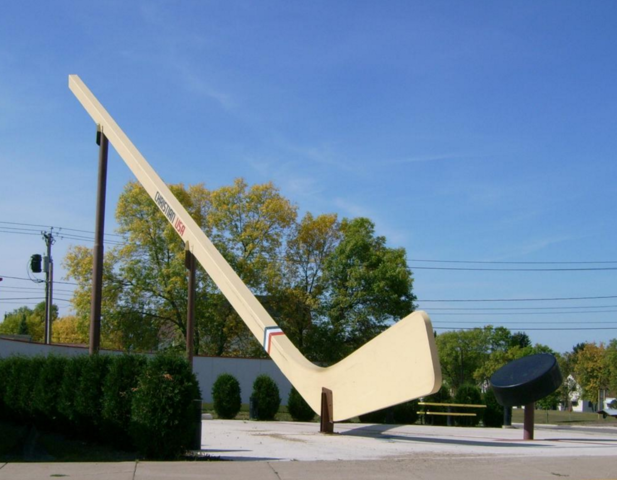 On Saturday September 16, 1995 the Hockey world’s attention was focused on the City of Eveleth, Minnesota. Henry Boucha, James Claypool, and Ken Morrow were in Eveleth, along with an abundance of Hockey dignitaries and fans, for the twenty-second U.S. Hockey Hall of Fame enshrinement ceremonies.

Along with the parade of Hockey greats were local residents who took an idea and made it a reality. Louis Muhich had the “seed of an idea” during a meeting where the Eveleth Merchant’s Association was pondering the question “What does it take to encourage visitors to turn off the highway and come into Eveleth?” Among the ideas shared was the concept “What is more iconic of Hockeytown U.S.A. than a giant Hockey puck?” After researching the idea and finding that in order to qualify for the record books the puck would have to be manufactured in the same way that a genuine Hockey puck is created that idea was scrapped. In its place was birthed the idea of creating an giant, authentic Hockey stick. And the rest, as they say, is history.

Bill, Roger, and Gordy Christian, with the help of Bill’s and Roger’s grandsons, created the original “Big Stick” using the same process that made Christian Brothers Hockey Sticks the premier Hockey stick for Hockey players around the world. Built of white and yellow aspen, the 107 foot stick had a finished weight of 7,000 pounds. Markings on the stick were exactly as they would be on any Hockey players stick, right down to the Christian Brothers logo.

The then vacant property at the corner of Grant Avenue and Monroe Street was selected as the location for the free-standing stick with an accompanying Hockey puck. Although not qualifying for the record books, this built-to-scale Hockey puck is 5 feet by 20 inches and weighs in a 700 pounds.

Over the years arguments have flown back and forth between Eveleth and Canada as to who has the largest “Big Stick”. If we were discussing shear size, then the vote would go to the 205 foot, Douglas fir reinforced with steel stick attached to the exterior of the Cowichan Community Centre, in Duncan on Vancouver Island in British Columbia. However, anyone from Eveleth can tell you that we are home to the largest free-standing, built-to-scale, authentic Hockey stick.