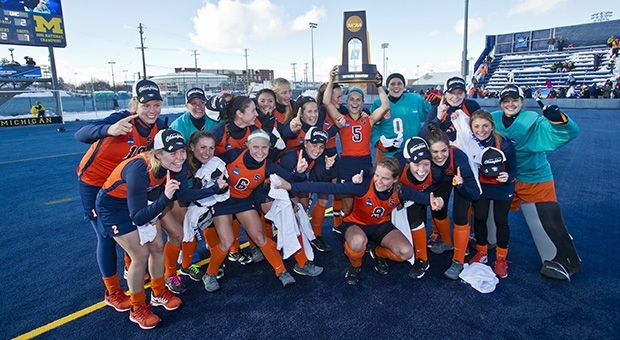 Syracuse jumped out to a 2-0 lead in the first 18 minutes. First senior captain Emma Russell received a cross-circle pass from Liz Sack and knocked a shot past North Carolina goalkeeper Shannon Johnson. Less than 10 minutes later, senior Alma Fenne scored her team-best 19th goal of the season on a hard shot from the left arc.

North Carolina wasn’t ready to call it quits after trailing 2-0 at halftime. Malin Evert assisted on a Gab Majors goal two minutes into the second half and then scored a goal of her own with a one-touch redirection of a pass from Casey Di Nardo with 14:08 left to play that pulled the Tar Heels (21-3) even.

Zoe Wilson, a freshman midfielder from Atrim, Ireland, was the unlikely hero. She scored her first career goal on a corner with 11:21 left to play, breaking the 2-2 tie. The Orange (21-1), who scored four goals on five shots, added an empty-net goal in the final minutes.

“I’m numb. I’ve been chasing this dream for 25 years,” said Bradley, who is in her 19th season as head coach at Syracuse. “I have no feeling because it’s so unreal right now. I’m just so proud of these women.”

Syracuse Orange Field Hockey captain Emma Russell became Syracuse’s all-time leader in points, as she scored 1 goal and assisted on another, capping an amazing four-year term with the team.