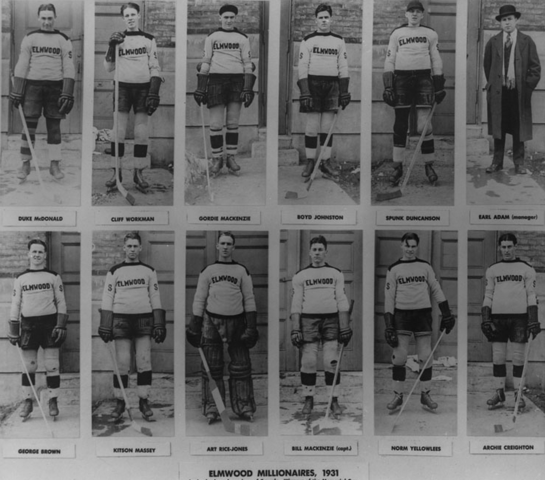 The 1931 Elmwood Millionaires were not favoured to win the Abbott Cup (Western Championship), let alone the Memorial Cup. The defending champion Regina Pats powerhouse was said to be a better team than the 1930 championship squad. In a two game total-goal series, the Millionaires were shut out 1-0 in game one. Needing to defeat Regina by two goals in game two to advance, Elmwood trailed 1-0 until scoring 2 goals in the third period. With the series' total tied, the teams went to overtime where the Pats scored first and Elmwood was in trouble. However, with 15 seconds left in extra time Millionaires defenceman Kitson Massey flipped a desperation shot from his side of centre ice that arched up through the Amphitheatre's lights, causing the Regina keeper to lose sight of the puck. The series was tied once again and the Elmwood squad prevailed in the second overtime, on a goal by Spunk Duncanson, by a score of 4-2.

It was off to the Arena Gardens in Toronto for the Memorial Cup final against the Ottawa Primroses in a best of three contest. Before 5,000 fans, Ottawa blanked Elmwood 2-0 in game one. The Millionaires battled back with a 2-1 win in the second game. In game three, the teams travelled to Ottawa where 9,000 fans were disappointed as the Millionaires skated to a convincing 3-0 win to claim the Memorial Cup..

The 1931 Elmwood Millionaires were inducted into the Manitoba Hockey Hall of Fame in the team category.