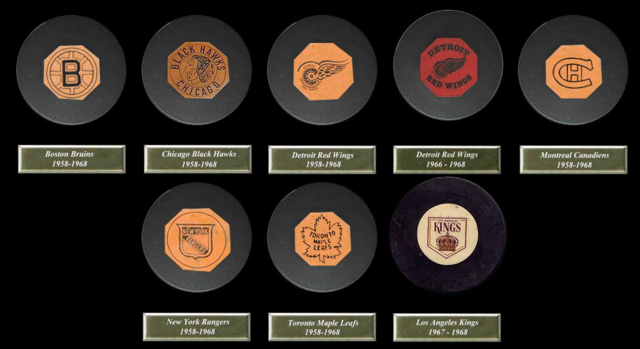 Team logos were appearing on game pucks for other professional leagues as early as 1950. The NHL followed suit in 1958 when the Tyer Rubber Company began putting team logos on their pucks. A new reverse logo was also designed. It was updated slightly in 1962 when they dropped 'Made in USA' from the back. Also round crested practice pucks were also being issued.

In 1964, the Tyer Rubber Company became the Converse Rubber Company. Wording on both the game pucks and practice pucks were updated to reflect this change. With expansion the game changed in a big way and so did the pucks. And while LA was not an original six team, a puck for the club has been found issued with an older, pre 1967 back logo.