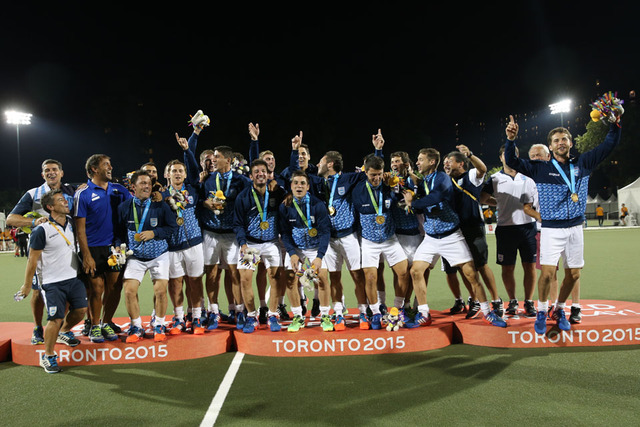 From the beginning, the game was an intense struggle for possession, with the game being developed mainly in midfield, during the initial ten minutes from the meeting. The stands were quiet while the battle raged in the first quarter. With the game in midfield, none of the teams had chances to score or penetrate rival circle. Thus, the first quarter closed Canada Argentina 0- 0.

The second quarter began with the first opportunity to attack Canada played 17 minutes as Gabriel Ho-Garcia made a pass to Iain Smythe who sought shoot, but the defense of Argentina captured the ball. Both teams continued to battle for possession in midfield. Argentina got their first penalty corner of the match in the 20th minute, but failed in executing the move. Seconds later, Argentina again earned a penalty corner and Canadian goalkeeper Dan Carter, saved the high drag flick shot Peillat. Devon Noronha and Mathew Teixeira Sarmento They performed passes between them, getting the first penalty corner of Canada 22 minutes, which was followed by another short corner in. Argentina goalkeeper Juan Vivaldi saved penalty corner shot keeping the game scoreless in this instance. Three minutes later, Argentina got two short corners more and Pedro Ibarra became the second in the 25th minute to open the scoring. 28 minutes in, Canada was awarded a penalty corner, but the shot from Scott Tupper hit the foot of an Argentine player and Argentina recovered the ball. Canada quickly returned to take possession and got another penalty corner, but Gordon Johnson shot was saved by goalkeeper Vivaldi. 30 minutes, Argentina won a penalty corner, but the keeper saved Carter. The result was Argentina 1 Canada 0, in the middle of game.

The third quarter began with Argentina quickly in attack and Lucas Vila, put a strong shot past Carter 33 minutes, leaving the score at 2 Canada 0 Argentina Argentina continued hard pressure of attack, but Canada regained possession and both teams continued to battle. Captain Scott Tupper and Adam Froese in Canada, continued to produce a solid and unbelievable defense containing Argentina attacks. During the rest of the third quarter, Argentina kept possession but Canada limited the possibilities of attack, and loosely prevented Argentina from his circle of attack. The score remained Argentina 2 Canada 0.

Argentina quickly launched into attack early in the fourth quarter. After 47 minutes, Manuel Brunet passed several defenders of Canada left side, lifting up high ball and putting it into the goal to give his team the lead by three goals for Canada. 50 minutes in, Canada had its first opportunity to attack the room, but Vivaldi saved. Canada continued to attack, but every time I approached the rival circle was with many Argentine players. 54 minutes in, Carter again saved Argentina preventing increases the scoreboard. Argentina continued to dominate possession and Carter again saved well 59 minutes The end result was, Argentina 3 Canada 0 repeating the gold and silver medals respectively.