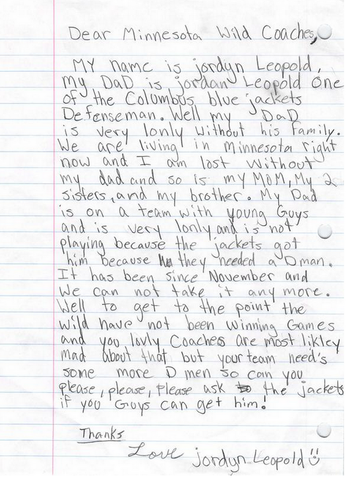 "I didn’t even know she wrote it," her mom Jamie Leopold told KFAN radio in Minneapolis. "She left it on the counter, went to school one day, and I read it and just started bawling."

"I put it on Facebook back in January and showed it to my friends and family and everyone said, ‘Send it, send it,’” Jamie Leopold said. "I was really hesitant to do it because we really liked Columbus and we had such a good experience there and we didn't want anyone to feel bad. But my daughter just wanted her daddy home."

Leopold had one goal and three points in 25 games this season for the Blue Jackets. He played college Hockey at the University of Minnesota and won the Hobey Baker Award in 2002.

"Very good writer," Wild general manager Chuck Fletcher said. "In fact, we may have an opening on our communication staff.

"I'm telling you, it was a pretty powerful letter. She hit on a good few points. Again, we’re excited for Jordan. He was a star here in high school and a star in college and is very familiar with all of our players from the summer, from skating with them and skating with a few of them. We think it'll be a good fit. ... You can’t have enough defensemen."

Leopold made his NHL debut Oct. 19, 2002 for the Calgary Flames and the Wild will be his eighth team.