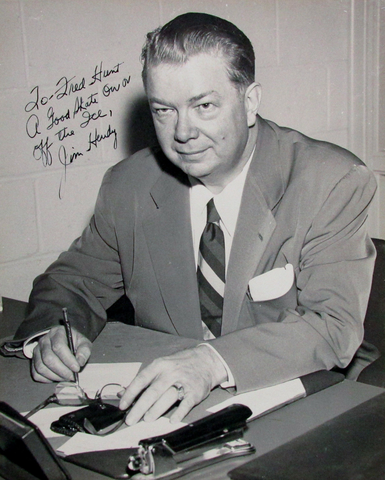 James Hendy was the Godfather of Hockey Statistics. Long before anyone cared, he put out yearly guides listing the stats of all the Hockey leagues out there. The first of Hendy's "The Hockey Guide" came out in 1932-33, the last in 1951-52.

Hendy was born in Barbados and moved to Vancouver, Canada at the age of 6.

As a young lad, he became a "rink rat," learning his Hockey at the Denman Arena, a rink that the Patrick Brothers, Lester and Frank, had built in Vancouver. Hendy ran away from home on several occasions, trying his luck as a cowboy, seaman, and telegraph operator with the United States Signal Corps. Although having limited formal education, he went to New York and secured a job filing copy for sporting events at Madison Square Garden for Western Union.

Hendy was a natural with numbers, his accurate statistical data and knowledge of the sporting world made him a favorite of newspaper writers in New York City. It was at this time that he also wrote fiction for Street & Smith's and sports articles for the "Saturday Evening Post".

Hendy also picked an annual NHL all-star team for McCall's magazine. During this time, Hendy, on his own, meticulously compiled records of players' regular season and playoff statistical performances. This became the origin of the modern statistics used to track the performances of professional Hockey players and teams that are still used today.

Hendy published his work in the first edition of "The Hockey Guide" in 1933. He continued to produce it annually until 1951 when competing pressure from his other Hockey jobs forced him to stop. He turned over the records and information to the NHL, asking only that they continue the work he started.

His Hockey legacy does not stop with statistics. He was also the president of the United States Hockey League, was a publicist with the New York Rangers and general manager of the Cleveland Barons of the American Hockey League. It was under Hendy's leadership that the Barons' became one of the most successful minor league franchises of all-time. Utilizing smart management skills, a keen knowledge of talent, and promotional insight.

In 1949-50, the Barons became the first team in AHL history to reach 100 points in the standings, and they would go on to reach the postseason in each of Hendy’s 11 campaigns. Hendy led the Barons to three Calder Cup Championships - 1951, 1953 and 1954, and were a finalist in 1956. His Barons became the model for a minor league Hockey franchise. His work with Cleveland earned him "The Hockey News" executive of the year on two separate occasions.

In 1953 he nearly got the Barons into the NHL, as he achieved conditional approval for a franchise from the league. The plan fell through when backers failed to come up with the required financial accountability.

Since 1961, the AHL has presented the James C. Hendy Memorial Award annually to the executive who has made the most outstanding contribution to the American Hockey League.

Hendy was honored with the prestigious Lester Patrick Trophy in 1970.

James C. Hendy was inducted into the Hockey Hall of Fame as a builder in 1968.