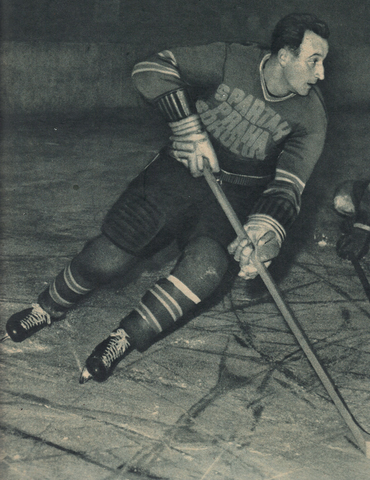 One of the greatest Czechoslovak Ice Hockey players of the 1940's, 1950's and all time.

Zábrodský would learn to play Ice Hockey at LTC Praha (Lawn Tennis Cercle Praha), where his father was the youth coach for many years. In 1940 Zábrodský would make the senior team, and in January 1941 would play in his first senior tournament in Munich, Germany vs BKE Budapešť and rakouským Klagenfurtem.

Zábrodský would also captain the Czechoslovak National Team in the 1948 Winter Olympics in St. Moritz, France where they would win the Silver Medal, losing gold to Canada on a tiebreak for Goal differential, as Czechoslovakia and Canada played to 0 to 0 tie in their game on February 6, 1948. Zábrodský would tie for most Olympic goals with Walter Halder of Canada, both scoring 21 in 8 games. The Czechoslovak National Team would win the European Championship in 1948.

At the 1949 World Ice Hockey Championships, Czechoslovakia overcame tragedy to win their second World Championship and ninth European Championship. In November 1948 six Czechoslovak players (Ladislav Troják, Karel Stibor, Zdeněk Jarkovský, Vilibald Šťovík, Miloslav Pokorný and defenseman Zdeněk Švarc) were lost when their plane went missing crossing the English Channel. Despite the key losses to their roster, they defeated the Sudbury Wolves, Canada's representative, three to two. It was only the third defeat for the Canadians at a World Championship. Zábrodský would score 10 goals in 7 games.

But it was their own people, driven by conspiracy theories in Stalinist Czechoslovakia, who prevented this great team from defending its title at the 1950 World Championship in London, England. Just before the national squad was about to board the plane for Great Britain on March 11, 1950, Zábrodský and the players were handcuffed by the national state security police (KNB, Czechoslovakian forerunner to the KGB) and taken to jail.

Seven months later, on October 7, the players appeared in court accused of attempting to defect and they were charged with treason. The security police presented “intelligence information” about plans to defect in Great Britain during the World Championship. The main argument was the information that in December 1948, the players of LTC Praha (most of whom played for the national team) had discussed the option of defecting in Switzerland after the annual Spengler Cup tournament in Davos.

Yes, there had been earlier defections by Czechoslovakian Hockey players to the west, but none of the accused players had ever seriously considered taking this step, although they had their chances. They could have stayed in Sweden after the 1949 World Championship or in Vienna where they prepared for the 1950 event in London. The players, of course, pleaded not guilty.

Needless to say, their fate was pre-determined by authorities who ruled the totalitarian regime, and twelve were sent to jail. The players were labeled “state traitors”.

Modry, the best goaltender in Europe of that era, died in 1963, at the age of 47, from prison related complications. Most of the players were released after five years, but their lives and families were shattered. So was a great Hockey team.

Vladimir Zábrodský was the only one from team, who was not sentenced. Instead of it he was only banned from National Hockey Team for 3 years. This led to suspicion, that it was him, who informed against his teammates, that they want to emigrate from communistic terror in Czechoslovakia.

Zábrodský would join Spartak Sokolovo in 1950 and help them win the Czechoslovak First Ice Hockey League Championship in 1953 and 1954.

Zábrodský would miss the 1952 Winter Olympics during his ban, and not play for the Czechoslovak National Team until the 1954 World Championships where he would score 4 goals in 10 games, and Czechoslovakia would finish in 4th place.

Zábrodský would help the Czechoslovak National Team win a Bronze Medal at the 1955 World Ice Hockey Championships, and score 13 goals during the tournament.

Zábrodský would play for Czechoslovakia at the 1956 Winter Olympics, and score only 2 goals in 7 games, in what would be his last major International Ice Hockey Tournament. The Czechs finished in 5th place.

Zábrodský finished his career playing for Bohemians CKD Praha after the 1965 season.

In 1965 Zábrodský managed to emigrate to Sweden, where he coached Swedish teams Leksand, Rögle and Djurgården until 1971. He is still living in Sweden.

Zábrodský will also go down to history as one of the players who were on the first ever Hockey team that visited Russia in 1948. His LTC Praha team played three games against the Soviets and helped them develop their Ice Hockey.

Vladimír Zábrodský was inducted into the International Ice Hockey Federation Hall of Fame in 1997.