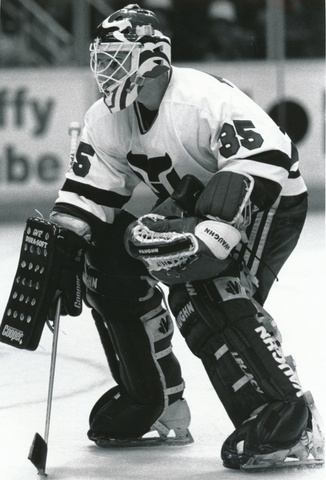 Whitmore was drafted 26th overall in the 1985 Entry Draft by the Hartford Whalers. He played most of his first four professional seasons for Hartford's minor league teams in Binghamton and Springfield, with some spot duty for the Whalers in 1989, 1990 and 1991. In the 1991 American Hockey League season, Whitmore led the Springfield Indians to the franchise's seventh and final Calder Cup, and was named the winner of the Jack A. Butterfield Trophy as playoff MVP.

The following season, Whitmore stuck in the NHL, platooning with Peter Sidorkiewicz in the Whaler net but losing his job to Frank Pietrangelo at season's end and in the playoffs.

In the 1992 offseason, he was traded to the Vancouver Canucks for Corrie D'Alessio and cash. That season, he played 31 games behind Kirk McLean and helped the Canucks win the Smythe Division season title, going 18-8-4 with a 3.10 GAA. In 1994, he played 32 games and posted an 18-14-0 record. In the playoffs, he helped his team win the Clarence Campbell Bowl in the Western Conference finals before losing to the New York Rangers in the Stanley Cup finals. In the shortened 1994-95 season, Kay played eleven games for the Canucks.

His contract expiring thereafter, Whitmore spent the next five seasons in the minor leagues, his most successful season being 1998, when he led the Long Beach Ice Dogs of the International Hockey League into the league semi-finals, as well as winning First Team All-Star accolades.

Being traded to the Boston Bruins in 1999 for future considerations, he was recalled from Boston's Providence farm team in the 2001 season during a spate of injuries, seeing his first NHL action in six years. Playing poorly in five games, he was sent back down to the minors. The following season Whitmore signed as a free agent with the Calgary Flames, but only played in one game for them, seeing most of his action for their American Hockey League farm team, the Saint John Flames. He retired from professional hockey thereafter, save for a three game playoff stint for the Nuremberg Ice Tigers of the Deutsche Eishockey Liga in 2005.