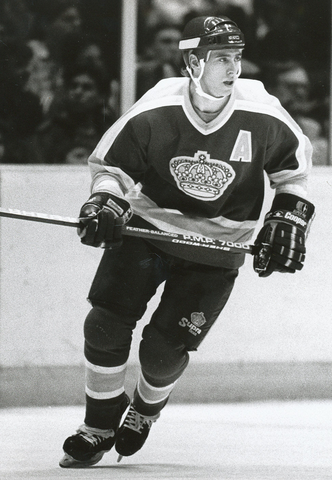 After Nicholls was drafted, he played one more year of junior before making his professional debut with the New Haven Nighthawks of the AHL. He scored 41 goals in 55 games as a rookie, and was recalled to the Kings on February 18, 1982 against the Calgary Flames to finish the season, where he had 32 points in 22 games, and was a contributor in the playoffs as the Kings upset the Edmonton Oilers to reach the second round. He also scored hat tricks in three straight home games in that rookie season. Nicholls would never again play in the minor leagues.

For the next six-and-a-half years, Nicholls was a key offensive talent for the Kings, with his best year (a team record 70 goals and 80 assists for 150 points in 79 games played) coming in 1988–89 after the team's acquisition of Wayne Gretzky. During that season, he became one of only 13 players in NHL history to record an eight-point game. However, with Stanley Cup aspirations, the Kings made the decision (during the 1989–90 season) to trade the star centre for a pair of wingers. Nicholls left the Kings as that franchise's fifth all-time leading scorer to join the New York Rangers, helping to propel his new club to the second round of the playoffs.

Although Nicholls performed well for the Rangers, he was dealt after less than two full seasons to the Oilers, as part of a blockbuster deal that saw Mark Messier join the Rangers. After just over a year with the Oilers organization, Nicholls saw himself traded again, this time to the New Jersey Devils, as Edmonton attempted to rebuild their team.

Nicholls adapted his game to become more of a defensive forward in the tight-checking system of then-Devils coach Jacques Lemaire. When his contract expired, Nicholls signed a two-year deal with the Chicago Blackhawks, where he was allowed to take more offensive liberties. He averaged better than a point-per-game in Chicago.

Nicholls finished his NHL career with the San Jose Sharks. At the age of 36, and with a budding young franchise, Nicholls took on more of an elder statesman role. At the end of the 1998–99 NHL season, Nicholls retired.

Nicholls won a silver medal in the 1985 World Ice Hockey Championships while playing for Canada.

Nicolls is one of only 8 players in NHL history to score 70 goals in one season, and one of 5 to score 150 points.