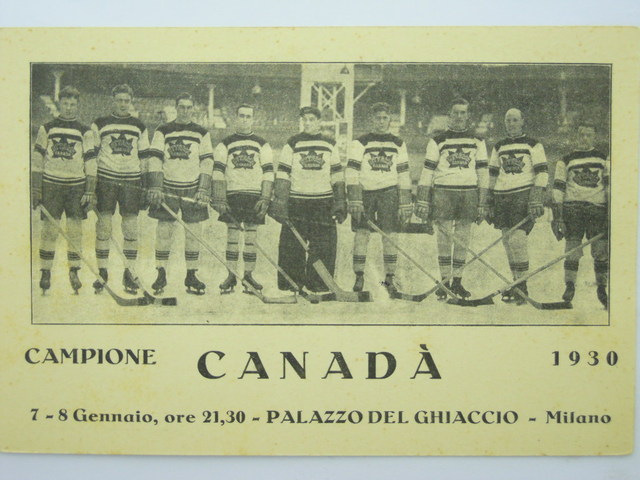 The teams they played were either national or all-star clubs. The Ottawa Senior City League was one of the strongest in the country at the time. It operated with five clubs - Shamrocks, Rideaus, LaSalle, Monties and New Edinburgh, better known as Burghs. "The question of which club from the City says. "They were all good teams." "The European players were good skaters and could stickhandle and bodychecked too.

After playing the European All-Stars to a 2-2 tie in the opening game of the tour before 16,000 spectators in Le Palais des Sports in Paris, Journal columnist Walter Gilhooly wrote: "Memories of the triumphal procession of Granites, Grads, Varsity and Winnipeg Falcons, who had toyed on other invasions with the best of the old world, commenced to haunt us."

Gilhooly needn't have worried. The Ottawa all-stars won 32 games, lost none and tied two. They scored 204 goals against 14. Louis St. Denis, who turned down many pro offers over the years, registered 17 shutouts. In their last appearance in Paris, the players were guests of legendary promoter Jeff Dickson at the heavyweight fight between Primo Camera and the French champion. Dickson took the opportunity to present the Canadian team with a special trophy.

Their game with Grosvenor House Canadians in London was played in the basement of the posh hotel, home of the Park Lane club. The game was broadcasted to Canada a first for European Hockey. Ottawa won 7-0, with Bill Cowley scoring three goals, Jacques Moussette a pair and George Reaume and Ernie Stitt one each.

The broadcast was one of three firsts. How "TV' League would be selected presented a problem," Duncan recalls. "The Auditorium was not pleased with the prospect of the schedule being changed." "At a meeting of the league, a decision was made to send an all-star team from the five clubs. The rules at that time allowed only 10 players to be dressed for a game. "Louis St. Denis was picked as the goalkeeper. Lou Bates of the Burghs, Les White of the Monties and Jack Draper of the Shamrocks were our defence picks. The forwards selected were Bill Cowley, brought up from Primrose juniors, Normie Schultz and Jacques Moussette from LaSalle, George Reaume of the Rideaus and Gene Sauvageau of the Shams. "Schultz suffered a severe hand injury in a league game and was unable to make the tour. Ernie Stitt of Burghs replaced him. "The clubs felt that as I (Duncan) had been the one who arranged the tour, I should manage and coach the team. Schultz's injury meant we had to leave with only nine players."

Other much more pressing problems were ahead for the all-stars. The team left Ottawa Nov. 24 by train to Montreal and transferred to another bound for New York, for embarkation on the French liner S. S. De Grasse. The ocean voyage took eight days and Duncan kept a daily diary on the activities of the players while on board, which ran in The Ottawa Journal in a three-part series.