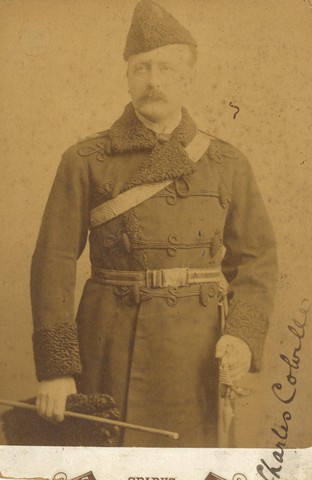 Charles Colville a former Stanley aide, and family friend was instructed in 1892 by Lord Stanley of Preston, then the 6th Governor General of Canada, to purchase a suitable trophy / silver bowl to be used for the Hockey championship of the Dominion of Canada.

Colville, who had resided in London, England, was to use 10 guineas to purchase and have the trophy engraved.

Colville would visit G.R. Collis & Co.(George Richmond Collis & Co) at 130 Regent Street, just off Piccadilly Circus in London, and he handpicked a beautiful silver punchbowl. He asked that on the outside of the bowl, it should be engraved 'From Stanley of Preston' along with the Stanley family crest. On the opposite side was to read 'Dominion Hockey Challenge Cup.'

Colville would then send the engraved silver punchbowl to Canada in late April, 1993 by steamship and then train to Ottawa, Canada, where it would be presented to Lord Stanley of Preston, for his approval.

Lord Stanley was pleased to hear that the trophy had arrived, and contacted John Sweetland, one of the two trustees he had appointed to oversee the trophy's activities, to fetch the trophy (which was already being called the Stanley Cup). Sheriff Sweetland did exactly that, then had the other trustee, Philip Dansken Ross, arrive at his house to see the silver championship bowl for the first time.

Lord Stanley insisted that the Cup remain a challenge trophy, presented for the amateur championship of Canada, and never become the property of any one team. The first Stanley Cup winner was the Montreal Hockey Club, a member club of the Montreal Amateur Athletic Association / Montreal AAA, in 1893. In 1910, after having being awarded to both amateur and professional teams, the Stanley Cup was awarded exclusively to professional teams. From the National Hockey League's formation in 1917 until 1926, the magnificent trophy was awarded to the winner of a playoff between the NHL and the Pacific Coast Hockey Association. When the PCHA dissolved in 1927, the Stanley Cup has since been presented exclusively to NHL playoff champions.

On the death of his brother Edward, the 15th Earl of Derby, in April 1893, Lord Stanley became the 16th Earl of Derby and was required to oversee the family estates. He resigned as Governor General and on July 15, 1893, returned to England. Lord Stanley of Preston never witnessed his namesake trophy presented to a championship team.

WHO WAS Charles Colville
Charles John Colville, 1st Viscount Colville of Culross - KT, GCVO, PC (Born November 23, 1818 – Died July 1, 1903), known as The Lord Colville of Culross between 1849 and 1902, was a British nobleman, Conservative politician and courtier.

Colville, who is the eleventh Baron of his order, is descended from a distinguished Scottish family, and is the son of the Honourable Sir Charles Colville, a well known General officer, who served with distinction under the Duke of Wellington, and was held in the highest estimation by him.

Colville accompanied the Earl of Ellenborough to India, on his appointment as Governor General. After remaining for 2 years on his staff, Lord Colville returned to England, and joined the 11th Hussars, from which he subsequently exchanged into the Coldstream Guards, in which corps he remained until he quit the service in 1846. Some time afterwards he received the appointment of Colonel of the Honourable Artillery Company, and retained it for many years.

In 1852, Colville was appointed the Whip to the Conservative party in the House of Lords, for which appointment his conciliatory manners, polished demeanour, and delicacy of tact eminently fitted him. And it was for a display of these useful qualities, manifested for so long a period, that Lord Derby recompensed him by recommending him to Her Majesty for the appointment of Master of the Buckhounds.

In 1866 Colville was sworn of the Privy Council. He was later Lord Chamberlain to the Princess of Wales from 1873 to 1901 and was appointed in the same capacity to her as Queen Alexandra from 1901 to 1903.

Colville was made a Knight of the Thistle in 1874, and created Baron Colville of Culross, in the County of Perth, in 1885, in the Peerage of the United Kingdom.

In 1902 Colville was further honoured when he was made Viscount Colville of Culross, in the County of Perth.

Lord Colville married the Honourable Cecile Catherine Mary Carrington, eldest daughter of Lord Carrington, Robert Carrington, 2nd Baron Carrington, in 1853. They had 2 sons and one daughter. Their first son, George, was the father of Sir Jock Colville, civil servant and memoirist.
Their second son was Sir Stanley Colville, who rose to prominence as a Navy officer.