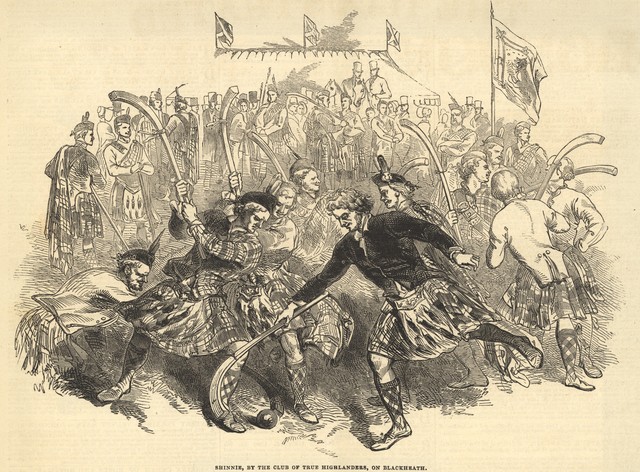 Shinnie - A Game of Shinty on Blackheath by the Club of True Highlanders 1845.

Camanach'd or Shinnie
We here to present to our readers the match of this ancient Scottish game, which was played on Monday week(June 30), by the members of the Club of True Highlanders. The spot selected for the sport was Blackheath, and the mustering-place the "Princess of Wales." A considerable party of the members accompanied by their friends and numerous visitors, numbering several ladies, were early at the appointed spot. The game, which is played with a hard ball and curved sticks, (the merit of which consists in sending the ball beyond a given boundary,) then commenced, and was kept up with much spirit until near five o'clock, during which time many clever hits were made, and many a blow on the shin both given and received; all players being in full Highland costume. The piper, too, was in attendance, and kept up the hilarity of the day bu performance of celebrated Scotch airs. After the game was concluded, the party retired to the "Princess of Wales," where a sumptuous repast was provided, and passed the remainder of the evening in mirth and good fellowship:-

And sure and a' they're nae to blame
For sounding out each hero's fame,
Wi'kilt well buckled round his wame,
Wha played wi' 'em at shintie.

The above club was established in the year 1815, for the relief of distressed natives of Scotland, and the preservation of the music, costume, and sports of the Gael. After an existence of thirty years , and numerous distributions from their funds, they have still a considerable sum in hand, which is fast accumulating, and will enable them more effectually to alleviate the distress of those whom misfortune has overtaken distant from their natal soil and their own country friends.

The members of the club hold their usual meetings at the Crown and Anchor Tavern, Stand.