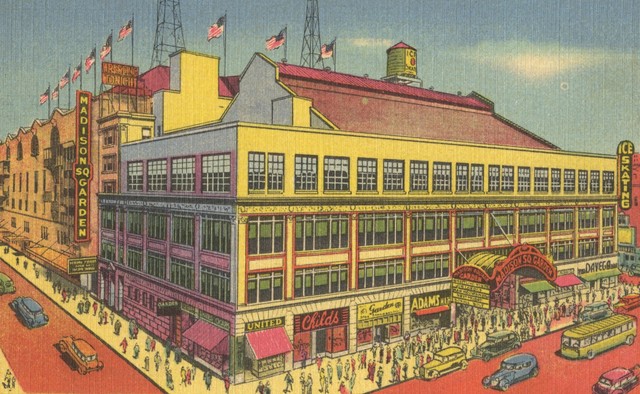 Madison Square Garden / MSG III was an indoor arena in New York City, the third bearing that name. It was built in 1925 and closed in 1968, and was located on Eighth Avenue between 49th and 50th Streets in Manhattan, on the site of the city's trolley-car barns. It was on the west side of Eighth Avenue. It was the first Garden that was not located near Madison Square. MSG III was the home of the New York Americans and the New York Rangers of the National Hockey League, the New York Knicks of the National Basketball Association, and also hosted numerous boxing matches, concerts, and other events.

The New York Rangers, owned by the Garden's owner Tex Rickard, got their name from a play on words involving his name: Tex's Rangers. However, the Rangers were not the first NHL team to play at the Garden; the New York Americans had begun play in 1925 – and in fact, officially opened the Garden by losing to the Montreal Canadiens, 3-1 – and were so tremendously successful at the gate that Rickard wanted his own team as well. The Rangers were founded in 1926, playing their first game in the Garden on November 16, 1926, and both teams played at the Garden until the Americans suspended operations in 1942 due to World War II. In the meantime, the Rangers had usurped the Americans' commercial success with their own success on the ice, winning three Stanley Cups between 1928 and 1940. The refusal of the Garden's management to allow the resurrection of the Americans after the war was one of the popular theories underlying the Curse of 1940, which supposedly prevented the Rangers from winning the Stanley Cup again until 1994.

The New York Rovers, a farm team of the Rangers, also played in the Garden on Sunday afternoons, while the Rangers played on Wednesday and Sunday nights.

Ground breaking on the third Madison Square Garden took place on January 9, 1925. Designed by the noted theater architect Thomas W. Lamb, it was built at the cost of $4.75 million in 249 days by boxing promoter Tex Rickard, who assembled backers he called his "600 millionaires" to fund the project. The new arena was dubbed "The House That Tex Built." In contrast to the ornate towers of Stanford White's second Garden, the exterior of MSG III was a simple box. Its most distinctive feature was the ornate marquee above the main entrance.

The arena, which opened on December 15, 1925, was 200 feet (61 m) by 375 feet (114 m), with seating on three levels, and a maximum capacity of 18,496 spectators for boxing. It had poor sight lines, especially for hockey, and fans sitting virtually anywhere behind the first row of the side balcony could count on having some portion of the ice obstructed. The fact that there was poor ventilation and that smoking was permitted often led to a haze in the upper portions of the Garden.