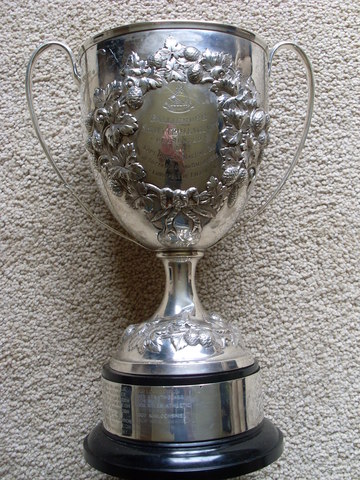 The Balliemore Shinty Challenge Cup, better known as the Balliemore Cup is currently the Intermediate Championship trophy for Shinty in Scotland under the auspices of the Camanachd Association and only first teams competing in North Division One and South Division One are eligible for entry to compete for the trophy and championship.

Early knowledge of the Balliemore Cup winners is currently not known. Some information about this trophy states that the trophy was donated by Major MacRae Gilstrap, brother of Captain Colin MacRae of Balliemore, who is said to have organized a Shinty competition in the early 20th century in the Kyles of Bute area, and the trophy was competed for by teams such as Kyles, Bute, North Bute, Balliemore and Rhubaan Rovers.
THERE IS NO EVIDENCE to support this theory.

Currently, the trophy has been played for since 1985.

Captain Duncan MacRae D.L.(Deputy Lieutenant) - Born 1890 – Died 1966 was a descendant of the Clan Macrae of Scotland.

Eilean Donan is a small tidal island where three lochs meet, Loch Duich, Loch Long and Loch Alsh, in the western Highlands of Scotland. There is a historic castle on the island that was originally founded in the Thirteenth Century, and destroyed in 1719, and then between 1919 and 1932 the castle was rebuilt by Lt. Col. John MacRae-Gilstrap.

The Macraes, who formed the bodyguard of the Chief of Kintail and were known as "MacKenzies Coat of Mail", first became Constables of the Castle in 1509.