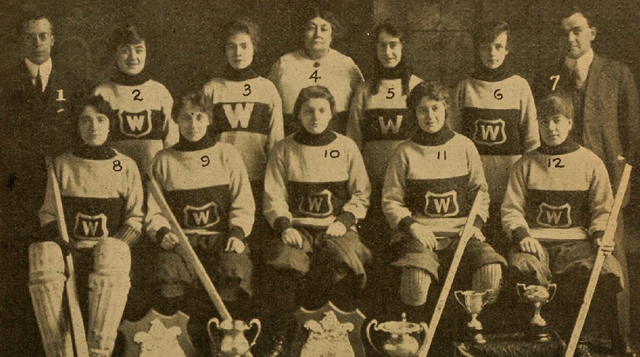 The league was the brainchild of a Montréal promoter named Len Porteous who collaborated with P.J. Doran, owner of the Jubilee Arena on Ste. Catherine Street East in Montréal, Quebec, where the women played their home games. Neither was known for his feminist credentials. To them, the Eastern Ladies Hockey League was strictly a business venture.

Len Porteous and Jack Thompson took the first steps toward the league in 1914, when they organized two teams, the Crescent Ladies and Maisonneuve Ladies, and played 5 games. Ned Guerin and Fred Legare were also involved in the teams and league.

As men enlisted in the tens of thousands for the first World War, the number of amateur leagues renting ice time at the Jubilee dropped off drastically. The women would, they hoped, make up for at least some of those “dark” nights. They couldn’t have dreamed of the gold mine the League would prove to be. The arena’s capacity was 3,200. It would be full every Monday night for regular league games. As the league’s popularity grew there would be more exhibition games and challenge matches.

There were four teams when the Eastern Ladies Hockey League began: The Westerns, Maisonneuves, North End Stanleys, and Telegraph. The newspapers called them “Lady Hockeyists.” They wore hoop skirts or bloomers with numberless jerseys and matching toques. Men’s Hockey pants would have been shockingly immodest to spectators at the time. Like other women Hockey players at the time, the Eastern Ladies played full-contact Hockey; they also followed the National Hockey Association’s rules for men.

The league was so popular that two teams, the Champetres and the Mintos, were added to the schedule before the end of the first season. The Westerns were the league champion the first two years, winning the Doran Cup for city supremacy. They were led by their star forward Agnès Vauthier, who was favourably compared to the best of the Canadiens players.

The Westerns did not lose a single game in their first 2 years, and only allowed 2 goals to be scored against them during the first season of the league.

Sourced from https://archive.org. Credited to Gordon.