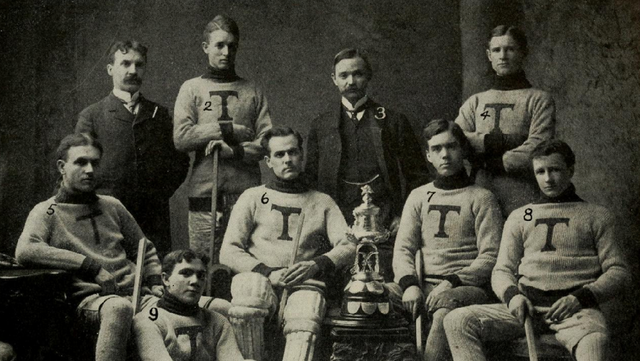 In 1891 representatives of the Bank of Montreal, the Imperial Bank, the Bank of British North America and the Dominion Bank organized the Bank Hockey League of Toronto.

The 1st champions in 1891 were the Dominion Bank, and the Bank Managers Challenge Cup was awarded in the Canadian Bank of Commerce's boardroom by B. Edward Walker, the bank's general manager.

To encourage smaller banks lacking the workforce to field competitive teams, an intermediate league was formed in 1894.

By the start of the 20th century, there were leagues in Winnipeg, Montreal, Halifax, Vancouver and Pittsburgh, Pennsylvania, USA.

The premiere Toronto Bank Hockey League played continually until the end of the 1904 season. Between 1905 and 1920, several seasons passed with no league play, most notably during World War I.

In 1921 in the Toronto Bank Hockey League, the Dominion Bank defeated the Canadian Bank of Commerce in a best of seven championship series. The Dominion Bank team then played a 2 game, total point series against the Royal Bank team, which had won the senior Montreal Bankers Hockey League championship for the newly offered Bogart Cup. The total points were even after the 2 games, and a tiebreaker was played in Toronto before a crowd of 5000.

Some players went on to professional Hockey careers. Lionell P. Conacher (not to be confused with his all-star, Hockey Hall of Fame brother, Charlie Conacher) was a member of the Dominion Bank's 1921 championship team, and later played defense for the New York Americans and the Montreal Maroons between 1925 and 1937.