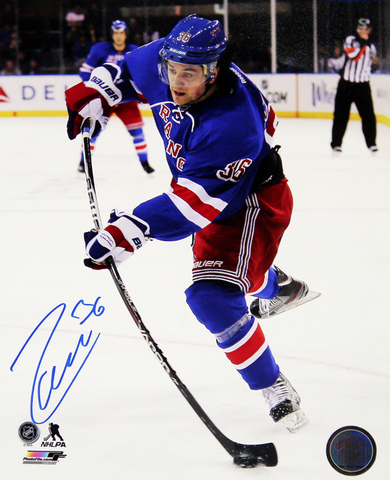 Zuccarello is the seventh Norwegian to play in the NHL. Before the NHL he played three seasons for Frisk Asker Ishockey / Frisk Tigers in the Norwegian GET-Liigaen, and Modo Hockey in the Swedish Elitserien for two seasons. In 2010, he won the Guldhjälmen (Golden Helmet), which is awarded annually to the most valuable player in the Elitserien, as decided by a vote of its players, and the Gullpucken as awarded by the Norwegian Ice Hockey Federation (NIHF) to the best Norwegian ice Hockey player each year.

In the summer of 2010, he was signed as a free agent by the New York Rangers of the National Hockey League (NHL) to a two-year entry-level contract. He started the 2010–11 season with the Hartford Wolf Pack (later renamed Connecticut Whale), the Rangers' American Hockey League (AHL) affiliate to learn the North American rink dimensions.

On December 22, 2010, he was called up to the Rangers following an injury to right winger, Marián Gáborík. He made his NHL debut on December 23, 2010 against the Tampa Bay Lightning, becoming the seventh Norwegian player to play in the NHL, and the second undrafted one. Zuccarello logged 17 minutes and 52 seconds of ice time and registered two shots on goal in his NHL debut. As the game remained tied after overtime, Zuccarello scored in the shootout against Lightning goaltender Dan Ellis. The Rangers lost the game 4–3. Though he was re-assigned to the Whale immediately after the game, the Rangers recalled him once more for their next game on December 27, 2010 against the New York Islanders. He earned his first NHL assist during the contest, tying defenceman Anders Myrvold for the Norwegian player with the fewest number of games played before recording an NHL point. The Rangers won the game 7–2. Nine days later in his sixth game, Zuccarello scored his first NHL goal against goaltender Cam Ward three minutes into overtime, leading the Rangers to a 2–1 victory over the Carolina Hurricanes. On April 1, 2011 he was reassigned to Connecticut after playing 41 games for the Rangers.

On April 13, 2011, Zuccarello became only the second Norwegian to take part in NHL postseason action when the New York Rangers lost 2–1 against the Washington Capitals.

On June 4, 2014 Zuccarello became the 1st Norwegian to play a game in the Stanley Cup Finals, playing for the New York Rangers vs the Los Angeles Kings. The Kings would win the game 3 to 2 in overtime.

Zuccarello also became the 1st Norwegian to get a penalty in a Stanley Cup Finals when he took a Holding Penalty at 14:34 of the 1st period of game 1.

Zuccarello is in his fourth NHL season, all with the Rangers, Zuccarello has scored 19 goals and 40 assists in 77 regular season games in 2013/14. He added four goals and seven assists in 21 post-season games, and helped the New York Rangers get to the Stanley Cup Finals.