Yuri Gagarin - “I am a friend, comrades, a friend!” 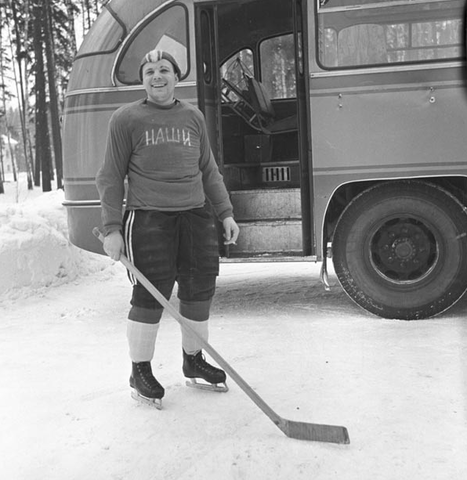 Yuri Alekseyevich Gagarin - Russian: Ю́рий Алексе́евич Гага́рин (Born March 9, 1934 in Klushino, Soviet Union – Died March 27, 1968 in Novosyolovo, Soviet Union) was a Soviet pilot and cosmonaut. He was the first human to journey into outer space, when his Vostok spacecraft completed an orbit of the Earth on 12 April 1961.

The Gagarin Cup (Russian: Кубок Гагарина, Kubok Gagarina) is the trophy presented to the winner of the Kontinental Hockey League (KHL) playoffs, and is named after cosmonaut Yuri Gagarin, the first human in space. The Cup was supposedly named after Gagarin because the last possible game of the inaugural KHL season would take place on April 12, the anniversary date of Gagarin's flight.

According to league commissioner Alexander Medvedev, the Cup was named after Gagarin because Russian citizens associate his name with the achievement of great accomplishments, and the man himself has been described as a symbol of the nation. Additionally, according to the founders of the KHL, his ascent into space serves as a metaphor for the contemporary Soviet breakthrough in Ice Hockey.

Yuri Gagarin was fond of ice Hockey. He liked to play goal keeper.

“When you see people at play in games such as Hockey and basketball and volleyball, a lot is revealed about their personality. Yuri was the peacemaker in Hockey. He was small, but the best basketball player the cosmonaut corps had, with quick reflexes. Even after he became famous he didn’t want to be a star. He wasn’t aggressive, but when he made a mistake he took himself to task quietly. He brought other people up to his level of intense playfulness.”

One of the most important heroes of modern times, the first man in space, Russian cosmonaut Yuri Gagarin, spent a large part of his life as a hardworking student, before being thrust into international superstardom when he was launched into space on April 12 1961.

It is popularly said that Gagarin was born the son of peasants. His parents did indeed work on a collective farm in the village of Klushino close to the town of Gzhatsk (now named Gagarin in his honour) in the Smolensk region. Despite their humble background they were both educated and his father was a skilled carpenter. As a youth Gagarin left home to do an apprenticeship in an ironworks. Whilst there he was selected for further training and was invited to study at the Saratov technical college. As a hobby in Saratov he joined the aeroclub and learnt how to fly light aircraft. When he left the technical school he enrolled at the Orenburg Pilot’s school just as the Soviet Union began to accelerate its work on its groundbreaking space programme.

Over 2,000 Russian military pilots were considered for the first human space flight. After passing through rigorous physical and psychological testing two men remained as candidates to fly in Vostok 1 - Yuri Gagarin and Gherman Titov. In the end Gagarin was chosen due to his small stature (5 foot 2, perfect for the tiny Vostok capsule).

After 11 months of intensive training and years of work on perfecting the Vostok rocket, the Soviets were ready for blast off. Based at the Baikonor cosmodrome in Kazakhstan, Gagarin was reportedly meticulously prepared and ready to fly and settled in for a sound night’s sleep, - unlike the rest of mission control who spent the night nervously pacing. When asked how he could sleep so easily given his historic flight the next day, Gagarin apparently responded “Would it be right to take off if I were not rested? It was my duty to sleep so I slept." On the day of the flight Gagarin smilingly entered the Vostok capsule and was strapped in. Whistling the popular patriotic tune by Shostakovich The Motherland Hears, The Motherland Knows, Gagarin prepared for lift off, and as he was launched into outer space was heard by mission control shouting “poekhali!” Let’s go!

Gagarin’s space flight lasted 108 minutes (enough time to orbit the earth once) and he reached an orbital speed of 27,400 kms per hour. In his first message to mission control and as the first man to communicate with earth from space, Gagarin pondered on the beauty of it all exclaiming “The Earth is blue.... How wonderful. It is amazing.”

Gagarin had been given only a 50% chance of surviving his trip up to space and the odds on him returning safely were even less favourable. In order for Gagarin’s space flight to be officially named a world record, he was required to stay in his capsule all the way to the earth. However, upon re-entering the earth’s atmosphere he encountered serious technical problems, that would have meant certain death if he hadn’t ejected himself from the capsule.

In order for the flight to be officially recognised by the international aviation authority the Soviet’s were forced to keep the real details of the landing a secret and the story of Gagarin’s curious return to earth were only made public some years later. At some 7,000 metres above the earth, after losing contact with mission control Gagarin evacuated himself from the capsule and free-fell through the air for several kilometres, before opening his parachute and floating down to the ground. Protected by his space suit he was able to withstand the air temperatures of nearly -30 degrees.

Landing in the middle of the Kazakh steppe, the first people to greet the first man in space were an obviously confused local babushka and her granddaughter. An elated Gagarin is reported to have greeted the bewildered onlookers by telling them “I am a friend, comrades, a friend!”

Back in Moscow Gagarin was honoured with a six hour long parade on Red Square before embarking on a trip around the world to talk about the wonders of space travel, bringing with him his famous dashing smile and passion for the beauty of the earth. Speaking about what the earth looked like from space, he said "What beauty. I saw clouds and their light shadows on the distant dear earth... I enjoyed the rich color spectrum of the earth. It is surrounded by a light blue halo that gradually darkens, becoming turquoise, dark blue, violet, and finally coal black."

Gagarin travelled to Britain, Japan, Germany, Finland, Italy, Canada and all across the Soviet Union spreading a message of peace, unity and environmentalism, inspired by having seen the earth from above. “Circling the earth in the orbital spaceship I marvelled at the beauty of our planet. People of the world!! Let us safeguard and enhance this beauty - not destroy it".

Soon Gagarin became one of the most popular and best loved public figures in the Soviet Union. Due to his high profile many became afraid of what would happen were he to travel to space again and die. This is why his first flight to space was also his last. Over the next few years the Soviet authorities tried to prevent him from taking part in further space flights and Gagarin was forced to compromise and became the head of the cosmonaut’s training centre at Zvezdnoy Gorodok (Star City) just outside Moscow.

During this time Gagarin also began to re-train as a fighter pilot and in 1968 at the age of just 34 he was killed in a fatal training flight around 100kms outside of Moscow. His cremated remains were scattered next to the Kremlin walls in Moscow and his office in Star City was turned into a museum and shrine to the first man in space. Now 50 years on Gagarin has a town, launch pad, moon crater, Ice Hockey Championship Cup, planetarium, airliner, asteroid and holiday – (Cosmonaut’s Day - colloquially known as Yuri’s night and celebrated on April 12) all named after him.