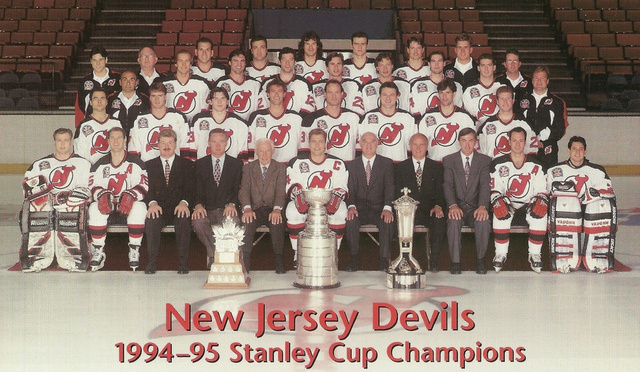 The 1995 Stanley Cup Final NHL championship series was contested by the New Jersey Devils and the Detroit Red Wings. This was the first of nine consecutive finals with American-based franchises exclusively. New Jersey was making the franchise's first-ever appearance in the Final, while Detroit returned to the Final for the first time since 1966. The Devils swept the series four games to none to win their first Stanley Cup, becoming the sixth post-1967 expansion team to earn a championship.

Despite the fact that the regular season was cut severely short by the owners lockout, both the season, and the finals were saved at the eleventh hour and the playoffs were held, despite many fans and sports writers insistence that such a short season did not adequately reflect a proper hockey season and should have been aborted. The win by the Devils marked their first Stanley Cup title, after 21 seasons and two franchise relocations. It was also the first of three for the Devils in less than a decade. The win was made more impressive by the fact that the Devils won it holding the lowest seed ever to win the Stanley Cup with the 5th seed, which remained the record until 2012, another Final which not only involved the Devils, but also saw the Stanley Cup won by a team that did not have home ice advantage in any of the four rounds of the playoffs, as the Devils lost to the Los Angeles Kings. Their regular season winning percentage was also the lowest since the 1967 Toronto Maple Leafs. They were the underdogs going in, winning their first two games on the road.